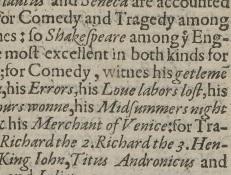 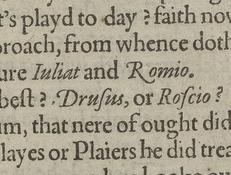 1598
The scourge of villainie: John Marston parodies Richard III, and alludes to Romeo and Juliet
SHAKESPEARE DOCUMENTED IS STILL GROWING! Descriptive content and transcriptions will continue to be added, updated and expanded. Check back for regular updates! 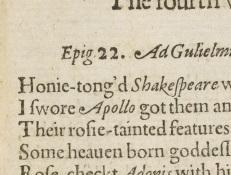 1599
Epigrams in the Oldest Cut: critical responses and allusions to Shakespeare and three of his works
John Weever’s Epigrammes in the oldest cut, and newest fashion was published in 1599. Weever began his career as an aspiring poet and literary observer at Cambridge, where he was the student of William Covell at Queen’s College. 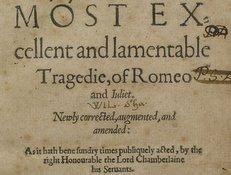 1599
Romeo and Juliet, second edition with manuscript note "Wil. Sha." beneath the title
SHAKESPEARE DOCUMENTED IS STILL GROWING! Descriptive content and transcriptions will continue to be added, updated and expanded. Check back for regular updates! 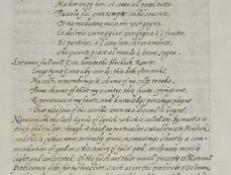 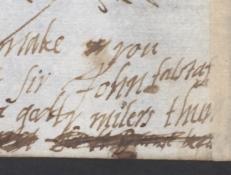 July 8, 1599
A letter to the Earl of Southampton from Elizabeth, his wife, in which she playfully refers to "Sir John Falstaff"
SHAKESPEARE DOCUMENTED IS STILL GROWING! Descriptive content and transcriptions will continue to be added, updated and expanded. Check back for regular updates! 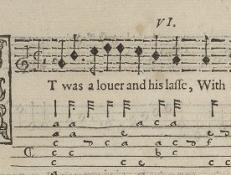 1600
The first booke of ayres: "It was a lover and his lass" from Shakespeare's As You Like It first published
SHAKESPEARE DOCUMENTED IS STILL GROWING! Descriptive content and transcriptions will continue to be added, updated and expanded. Check back for regular updates!

February 17, 1600
Examination of Sir Gelly Meyrick
In early 1601, Robert Devereux, Earl of Essex, led a rebellion which was over almost as soon as it began. 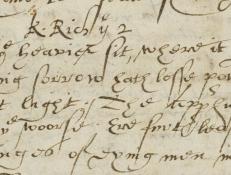 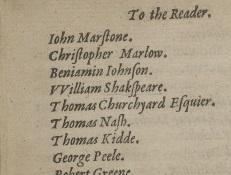 1600
Shakespeare anthologized: Bel-vedére or The garden of the Muses
Like other plays from the period, Shakespeare's plays were meant to be read both as stories and as sources for sententiae, or memorable aphorisms.