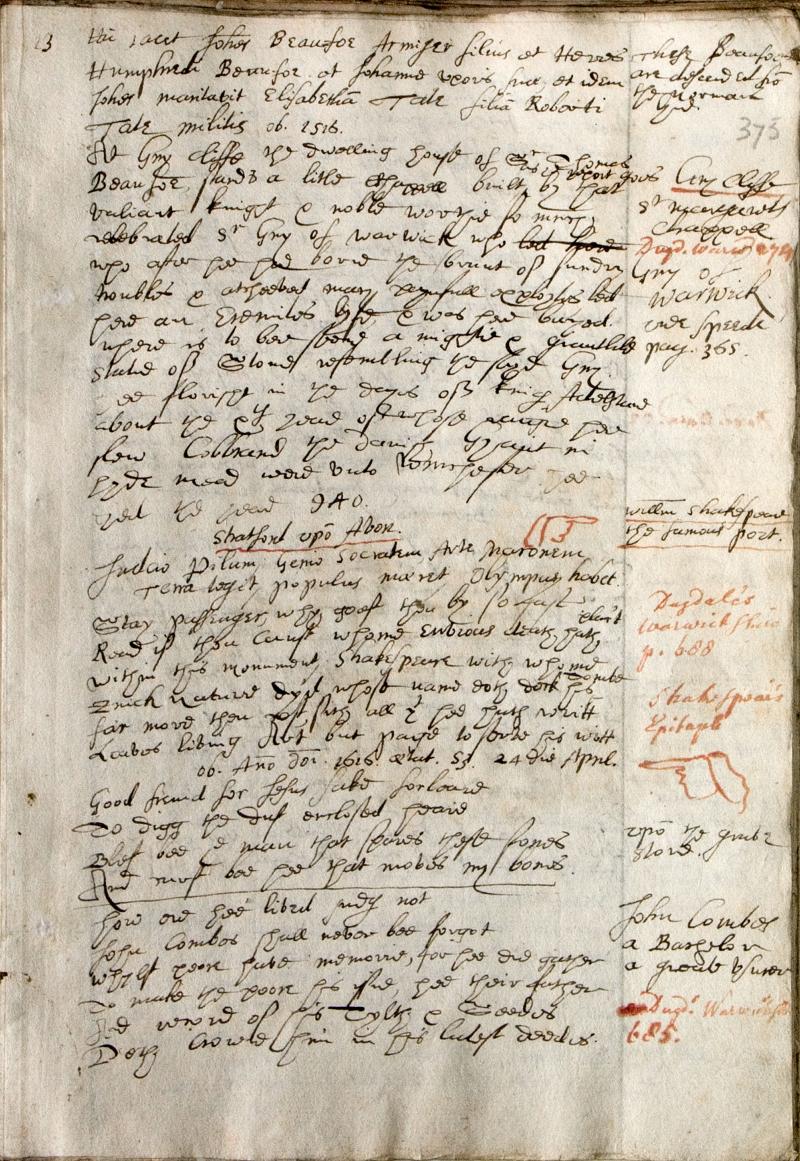 John Weever, a 17th century antiquary, spent approximately three decades gathering notes for his magisterial Ancient Funeral Monuments (1631). One of his surviving notebooks includes notes on Stratford-upon-Avon, with transcriptions from William Shakespeare’s funeral monument. These notes do not appear in Weever’s massive printed tome, which covers London and environs, the counties of Essex and Norfolk, and the town and county of Canterbury and Kent.

Although dedicated to Lichfield and Coventry, the unpublished notebook, a comparatively brief 36 leaves, includes Holy Trinity Church in Stratford-upon-Avon, Warwickshire (p. 13), as Weever organized his materials by ecclesiastical district rather than by county. For Stratford, Weever confined his attention to the funeral monuments of Shakespeare and John Combe. Weever transcribed the Latin and English inscriptions from Shakespeare’s monument, along with the English inscription from Shakespeare’s gravestone. For Combe he recorded a satirical epitaph  (“How ere hee lived Iudg not”) that does not actually appear on Combe’s monument, but that is attributed elsewhere to Shakespeare. A contemporary author, Patrick Hannay, in A Happy Husband (1619, or November or December 1618), published a variant poem which he entitled “An Epitaph Vpon one Iohn Combe of Strat-ford vpon Auen, a notable Vsurer, fastened vpon a Tombe that he had caused to be built in his life time” (sig. L2v). Perhaps the verse cited in Weever’s notes was similarly “fastened upon” Combe’s tomb.

For each man, as was his practice throughout his notebooks, Weever supplied a marginal identification and characterization: “William Shakespeare the famous poet”; “John Combe a Bachelor a greate vsurer.” Weever’s marginal note near the top of the page, “vide Speede pag. 365,” references John Speed’s History of Great Britain (1611).

Weever’s transcriptions from Shakespeare’s monument antedate the description of Lieutenant Hammond, who visited the church and recorded notes on Shakespeare and Combe on August 11, 1634. Like Weever, Lieutenant Hammond observed the presence of “some witty, & facetious verses” for John Combe, which he attributes to Shakespeare, the “sayd poet.”

Weever made his transcriptions some time between Shakespeare’s death in April 1616 and Weever’s own death in 1632. Later in his notebook, Weever records the “sumptuous” monument of Sir Gilbert Gerard in Ashley, Staffordshire (p. 21). While Sir Gilbert died in 1593, Weever records that “by his side” is the monument of his son, Sir Thomas Gerard, asserting that the latter “dyed” on October 7, 1617 (perhaps extrapolating from Sir Thomas’s will, dated October 6, 1617). Sir Thomas Gerard actually died on January 15, 1618. Considering that a monument might require a year for carving and installation, and because no later monument is recorded in the notebook, a reasonable supposition is that Weever’s notes were compiled in or about 1619. In addition to a few spelling errors and variants, Weever records Shakespeare’s date of death as April 24 (“24 die April”) rather than April 23 (“die 23 Ap.”), as incised on the monument. Transcription errors such as this are not unusual for the time, and rules for spelling were not established in this period.

Of additional interest are Weever’s transcriptions (p. 30, not shown above) from the monument of Sir Edward Stanley in Tong, Shropshire. Sir Edward commissioned two monuments in or shortly after 1601, in response to the deaths of his wife Lucy and four of their seven daughters. One monument, for Lucy, Arabella, Mary, Alice, and Priscilla, was erected in Walthamstow, Essex; the other was erected for Sir Edward’s deceased father and eventually for himself in Tong. Two poems incised on the Tong monument were ascribed to Shakespeare as early as the 1630s, and are discussed by many of the sources cited below. The Tong monument also proclaims: “Petronella, Frances, and Venetia are yet living.” If one of these three daughters had died before he made his notes, Weever might have recorded the fact, thus helping to date the manuscript; but he copied the 1601 inscription without further comment, and in any case all three daughters outlived their father, who died in 1632.

Weever’s notes for his great project, both published and unpublished, survive in miscellaneous notebooks bound as MSS 127 and 128 in the Library of the Society of Antiquaries, London. The “Lichfield and Coventry” leaves are fols. 368-84 in volume 128, but the notebook of 36 leaves also carries its own internal pagination (pp. 1-33, with unpaginated first and last leaves). This internal pagination is in Weever’s hand. John Lane of Hillingdon, Middlesex, a relative of the Weever family, owned the notebooks in the 18th century. The volumes were in their current bound state when they were presented to William Southouse, FSA, after Lane’s death. Southouse presented the volumes to the Society of Antiquaries, London, on February 14, 1792. Jottings in red ink, the work of an 18th century antiquary, appear throughout the notebook and indeed throughout both manuscript volumes, cross-referencing Weever’s notes against another antiquarian work, the 1750 edition of Sir William Dugdale’s Antiquities of Warwickshire (1656).

Weever previously praised William Shakespeare and his poetry in Epigrams (1599), and wrote a rebuttal of sorts to the portrayal of Sir John Oldcastle (in the guise of Falstaff) in the Henry IV plays in The Mirror of Martyrs (1601).

[[Translation of Latin couplet:
A Nestor in judgment; a Socrates in genius; a Virgil in art:
The Earth conceals him; the people mourn him; Olympus has him.]]