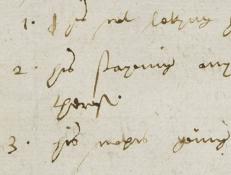 September 9, 1609
Thomas Greene, Stratford-upon-Avon’s town clerk, or steward, notes that he "might stay another yere at newe place"
Thomas Greene, a Middle Temple lawyer, was appointed Stratford’s steward in August 1603. He clearly settled in the town at that point, but until September 1609 there is no record of where he lived. 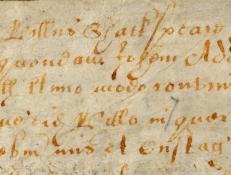 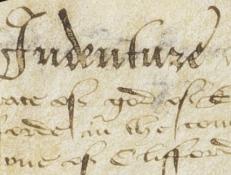 ca. 1609
An endorsement, added between 1603 and 1616 to a deed of 1572, defines the eastern boundary of William Shakespeare’s New Place property
A messy note, included on the back of a 1572 lease, informs us of the extent of Shakespeare’s property at New Place. Shakespeare purchased New Place in 1597, which stood on the corner of Chapel Street and Chapel Lane. 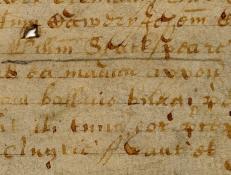 February 15, 1609
Shakespeare sues John Addenbrooke: a writ to require the attendance of jurors, under threat of dispossession of their goods
On August 17, 1608, William Shakespeare (or his family or agents acting on his behalf) began an action in the Stratford court of record to recover a debt of £6 from John Addenbrooke. The case dragged on until at least June 7, 1609. 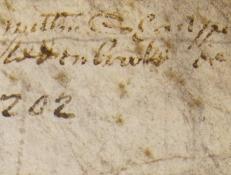 March 1609
Shakespeare sues John Addenbrooke: list of jurors and record of verdict (with costs and damages) for the plantiff
On August 17, 1608, William Shakespeare (or his family or agents acting on his behalf) began an action in the Stratford court of record to recover a debt of £6 from John Addenbrooke. The case dragged on until at least June 7, 1609.