Witter v. Heminges and Condell: Shareholdings in the Globe: The joint and several answers of John Hemings and Henry Condell, gents 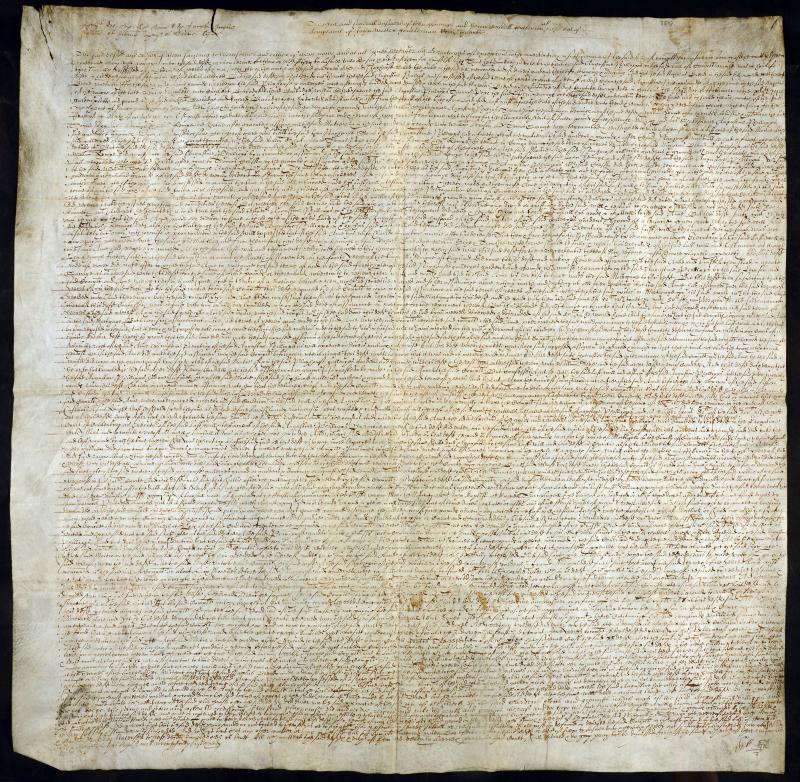 In 1606 John Witter of Mortlake, Surrey, married Anne Phillips, widow of Augustine Phillips, a member of the King’s Men who had died in 1605. Though Anne was both a beneficiary and the executrix of her deceased husband’s estate, a clause in Phillips’s will stipulated that, should she re-marry, the executorship of the estate, including the Phillips share in the Globe, would pass to his overseers John Heminges, Richard Burbage, and William Slye, who were principal actors with the King’s Men, and to Timothy Whitehorn. Accordingly, in 1607, a year after Anne’s remarriage, the executorship passed to John Heminges (Playhouse Wills, p. 74). Following Anne’s death in January 1618, Witter sued Heminges and Henry Condell for her share in the Globe. The resulting lawsuit, from which eight documents survive, provides useful information on the Globe site and the Globe playhouse.

Shown here is the Answer of Heminges and Henry Condell, dated April 28, 1619, to Witter’s original Complaint, dated April 20, 1619. This Answer names William Shakespeare seven times, in each case as one of the five original leaseholders of the Globe playhouse, as from February 21, 1599. Importantly, the Answer cites the original lease in some detail, revealing that control over the site of the Globe playhouse was divided equally between the second and the third parties of a tripartite indenture, each party holding a “moitie” or half:

Of the five shareholders, John Heminges is separately characterized as “one of the said defendants” in the current suit. The answer continues:

... Which said William Shakespeare, Augustine Phillipps, Thomas Pope, John Heminges & William Kempe did shortlie after graunte & assigne all the said moitie of & in the said gardens & groundes vnto William Levison and Thomas Savage, who regraunted & reassigned to euerye of them seuerally a fift parte of the said moitie of the said garden & groundes, vpon which premisses or some parte thereof there was shortly after built the said then playhowse. ...

Thus Heminges and Condell reveal that “shortly after” February 21, 1599, the five shareholders who constituted the third party to the lease, including William Shakespeare, transferred their moiety to William Leveson and Thomas Savage, who transferred it back to the five as five distinct parts rather than as one entire moiety. These actions have been identified as a legal maneuver to change the shares from joint tenancy to tenancy in common. In effect, each shareholder could now own or sell his individual portion without consulting the others.

Without Witter we would know the names of the original leaseholders (from Ostler v. Heminges), but we would not know that William Leveson and Thomas Savage assisted in making the five shares of the second moiety (each representing one-tenth of the value of the Globe site and playhouse) into an individual rather than a joint asset. This same maneuver similarly explains how some shares ended up being sold to or inherited by individuals who were not actors in the playing company. These transfers of shares led over time to yet more lawsuits, including Burbage et al. v. Brend (1632) and Benefield v. Burbage (1635), which reveal still more information about the Globe.

Throughout, Heminges provides a more detailed history of the shares in the Globe site than Condell, simultaneously confirming that Witter and Anne had been “secretlie marryed” in an attempt to escape from the exclusionary clause of Phillips’s will, and characterizing Witter as an abusive and spendthrift husband who had impoverished his wife and her children. Indeed, Heminges had felt sorry for her and come to her assistance:

In short, Heminges, in his charity, had saved Anne and her children, and Witter himself, from financial ruin.

Incidentally, Heminges claims to have in his possession both Augustine Phillips’s original will, and the original indenture of lease for the Globe site (dated February 21, 1599): “[He] Confesseth that he hath the said last will and testament of the said Augustine Phillipps and the said dede …” This helps to explain why Phillip’s will in the PROB 10 series in The National Archives is a copy rather than the true original, and why the original indenture of the lease for the Globe site must be reconstructed from other documents. Unfortunately, both original documents must have been lost along with the rest of Heminges’s papers.

[This transcription is pending final vetting. Transcription based on Charles William Wallace, "Shakespeare and his London Associates, As Revealed in Recently Discovered Documents" University of Nebraska Studies, vol. 10 no. 4 (1910), 52-63.]

To learn more, read Alan H. Nelson's essays on lawsuits in Shakespeare's England, and the 1599 lease of the Globe playhouse site.