Patronage of wealthy and noble individuals was highly desirable for writers and poets throughout the early modern period, but it was absolutely essential for players. Per the "Acte for the punishment of Vacabondes," issued in 1572, any group or individual who wished to travel and sell, perform, or otherwise purvey their goods or services needed to have the patronage of either two judges or one nobleman. As the law was revised and refined, only the highest of noblemen were allowed to provide patronage to acting troupes--this was partially a political move for the aristocracy of the time, but was extremely influential in the organization of professional groups of players. Elizabeth I was the first to form a troupe under the patronage of a sitting monarch in 1574, and James I (who was known for his patronage of artists, poets, and actors), was quick to make Shakespeare's theater company, the Lord Chamberlain’s Men, his own once he reached London in May 1603. At the time, the London theaters were closed due to the plague. When they reopened, his warrant decreed that the players were to perform “within their now usual house called the Globe” and throughout the country "for the recreation of our loving subjects" and for the king's "solace and pleasure when we shall think good to see them." Shakespeare and his fellows were now the King's Men. 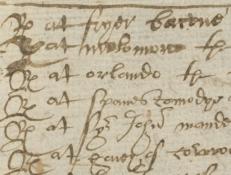 1592- 1594
Henslowe's diary: including the first recorded performances of Henry VI and Titus Andronicus, and a possible performance of The Taming of the Shrew
The entrepreneur Philip Henslowe’s unique “Diary,” or account book, of his extensive theatrical enterprises records the titles of over 325 plays from 1592 to 1604, including two, perhaps three, plays written in part or whole by Shakespeare: Henry VI Part 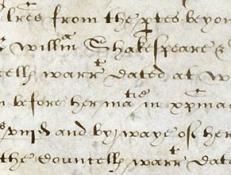 March 15, 1595
Exchequer, Pipe Office, Declared Accounts: Listing Shakespeare as a leading player of the Lord Chamberlain’s company
By March 15, 1595, and inferentially by Christmas 1594, William Shakespeare had become a leading member of his company, the Lord Chamberlain’s players, sufficiently senior to serve with William Kempe and Richard Burbage as a financial trustee. 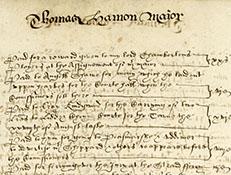 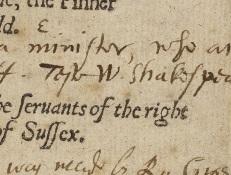 February 17, 1600
Examination of Sir Gelly Meyrick
In early 1601, Robert Devereux, Earl of Essex, led a rebellion which was over almost as soon as it began. 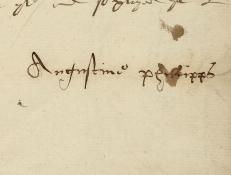 February 18, 1601
Examination of Augustine Phillips
In early 1601, Robert Devereux, Earl of Essex, led a rebellion which was over almost as soon as it began. 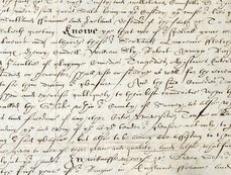 May 18, 1603
King James establishes the King's Men: warrant under privy seal
Although James VI of Scotland was proclaimed king of England on March 24, 1603, it took him over a month to arrive in London. 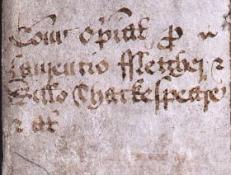 May 19, 1603
Enrollment of letters patent issued under the signet and privy seals authorizing the King's Men
Although James VI of Scotland was proclaimed king of England on March 24, 1603, it took him over a month to arrive in London. 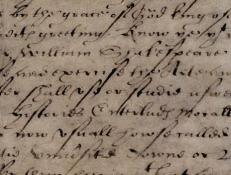 May 17, 1603
King James establishes the King's Men: warrant under signet seal
Although James VI of Scotland was proclaimed king of England on March 24, 1603, it took him over a month to arrive in London. 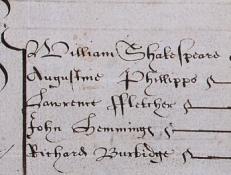 May 15, 1604
Account of the Master of the Great Wardrobe, recording the issue of red cloth to Shakespeare and his fellows for the entry of King James I into London
The paper notebook shown here names William Shakespeare as a recipient of 4 1/2 yards of red cloth in anticipation of King James’s coronation progress, granting Shakespeare substantially the same recognition as the rest of the twenty-eight players named in the Lord Chamberlain’s accou