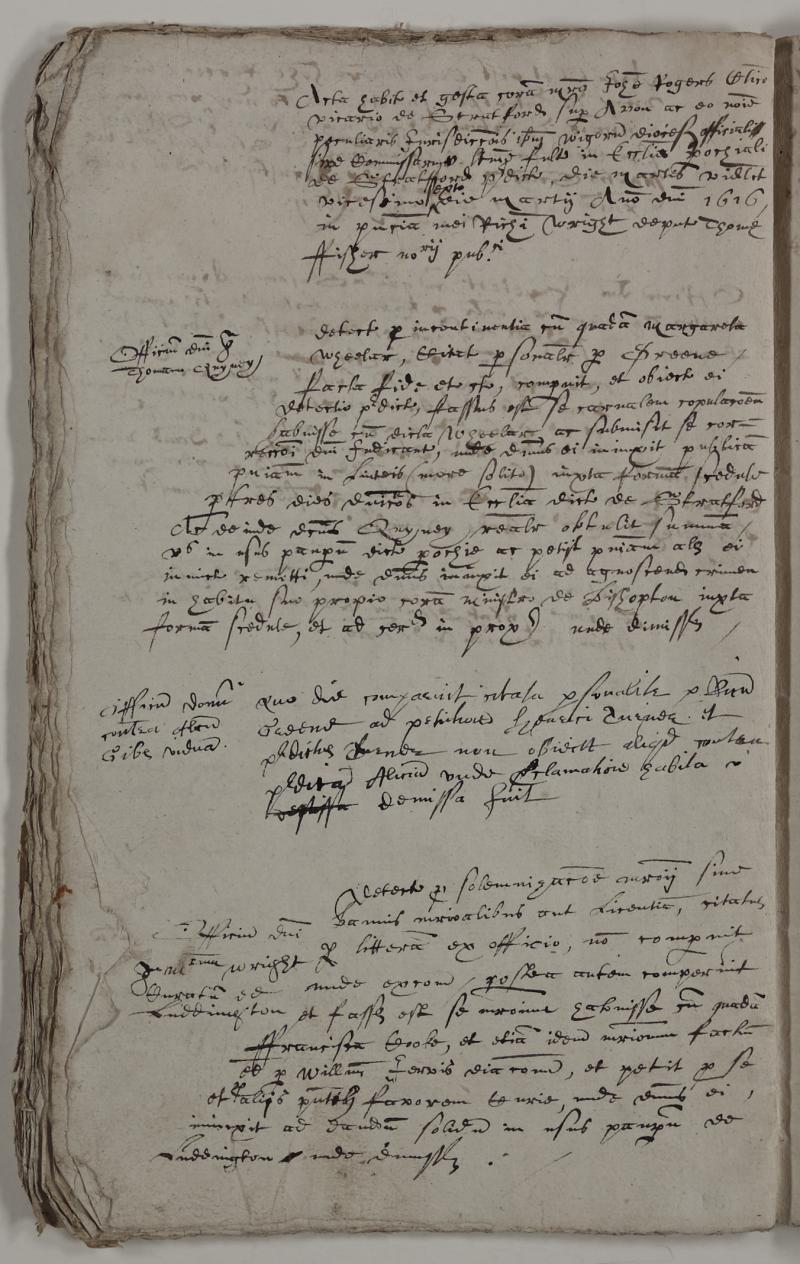 Robert Bearman, "A record of a hearing in the Stratford-upon-Avon Peculiar Court following a charge brought against Thomas Quiney of incontinence with Margaret Wheeler," Shakespeare Documented, https://doi.org/10.37078/562.

Not two months after his marriage to Judith Shakespeare, Thomas Quiney faced a charge of incontinence with Margaret Wheeler, brought against him in the Stratford Peculiar Court, the church court. The case was of particular notoriety as Margaret Wheeler “& her Child” had been buried together eleven days earlier, on March 15. Margaret remains an elusive character but may have been the daughter of Randle Wheeler, baptized on September 3, 1586. Randle and his son David had also been cited in the church court on June 3, 1608 for an unknown offence. The citation was made in the name of Richard Greene, probably the same man as the Richard Greene, described as “parish Clarke” on his burial in August 20, 1617. Quiney duly appeared in the court on March 26 and admitted the charge of carnal copulation.

In cases of this sort, the court had no power to fine or imprison offenders but could require penance, either publically while clothed in a white, or privately, in return for a money payment (usually to the poor). In this instance, Quiney was initially ordered to perform public penance in the parish church on three successive Sundays, clothed in a white sheet. However, after Quiney offered 5 shillings for the use of the poor, his public penance was remitted. Instead, Quiney was simply required to appear before the minister at Bishopton chapel, a mile away, and (in his own attire) acknowledge his fault. The court’s act book records a few similar cases, with commuted payments to the poor of either 5 shillings or 10 shillings, partly in recognition that the offspring of such liaisons could become chargeable to the parish.

The most significant result of these revelations was the redrafting of Shakespeare’s will with the specific purpose of safeguarding his daughter Judith’s interests. Exactly when Shakespeare learned of the charge brought against Quiney is unknown, but he signed a re-drafted will on March 25, the day before the affair became public. One of the revisions concerned Judith’s marriage portion. Shakespeare set this at £300, but vested half of it in trustees for three years (subject to an annual payment of two shillings in the pound to her). The trustees were only required to make this remaining £150 over if Quiney (chillingly referred to as “such husbond as she shall … be marryed unto”) had settled land on her worth the full sum of the marriage portion. If he failed to do so, then the money would continue to be held in trust for Judith’s benefit alone; there is no evidence that Quiney ever settled the required amount of land on her.

Despite this citation and his excommunication for marrying in Lent without a license, it would appear that Quiney did not suffer long-lasting public disgrace, as he was elected a capital burgess the following year.

The entries for the proceedings on March 26, 1616, including the charge against Quiney, occur on two facing pages (pages 66-67) of the court register, but between entries for courts held eight years earlier, on August 30 (p. 65) and October 14, 1608 (p. 68). The obvious explanation for this anomaly is that the opening (pages 66-7) now recording the proceedings of March 26, 1616 had been accidentally left blank, and was used retrospectively after some at least of the remaining pages in the volume had been used up. The register, as it now exists, ends at page 74 on December 2, 1608, but a close examination reveals that it now apparently lacks at least its last ten leaves (twenty pages) with the next register beginning in 1622. Other documents provide good evidence that courts continued to be held between 1608 and 1622. . It must therefore be that on March 26, 1616 the clerk decided to use the opening accidentally left blank in 1608 (pages 66-7), to record details of the court’s proceedings on that day. We might reflect that, had he not done so, he would have made the entry concerning the Quiney case on one of the final pages of the register now lost to us. 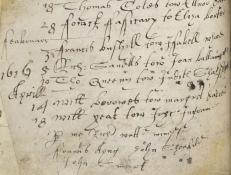