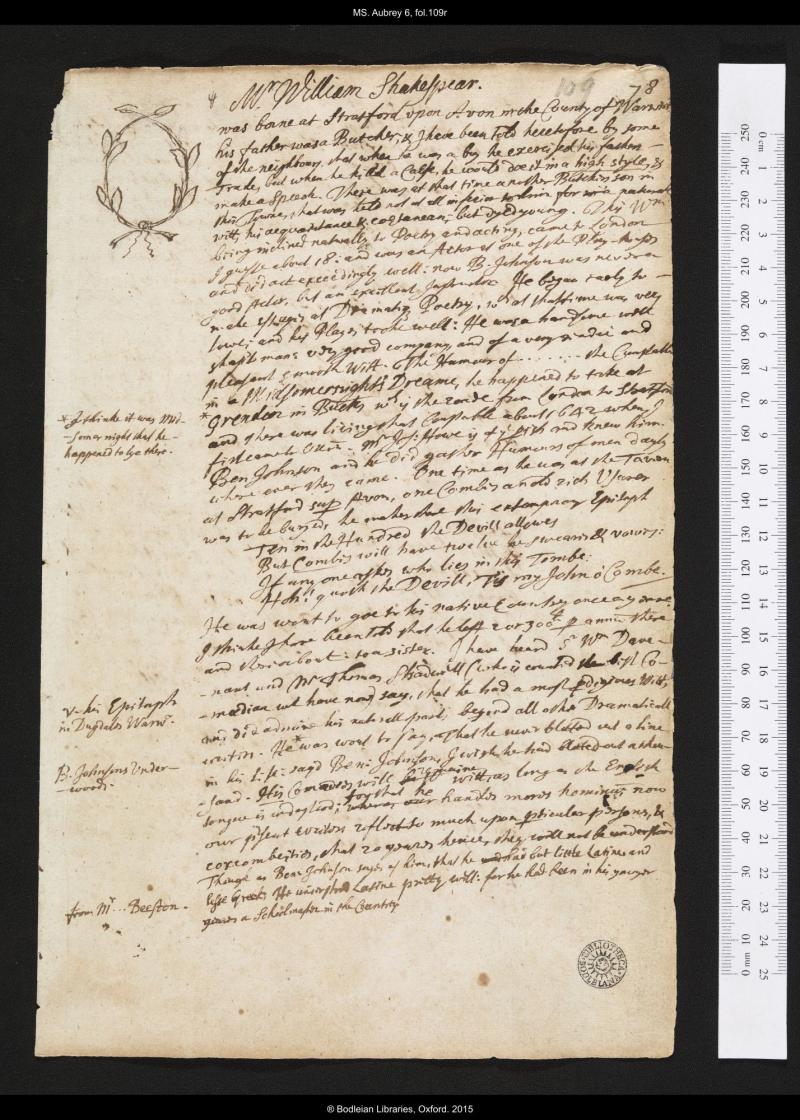 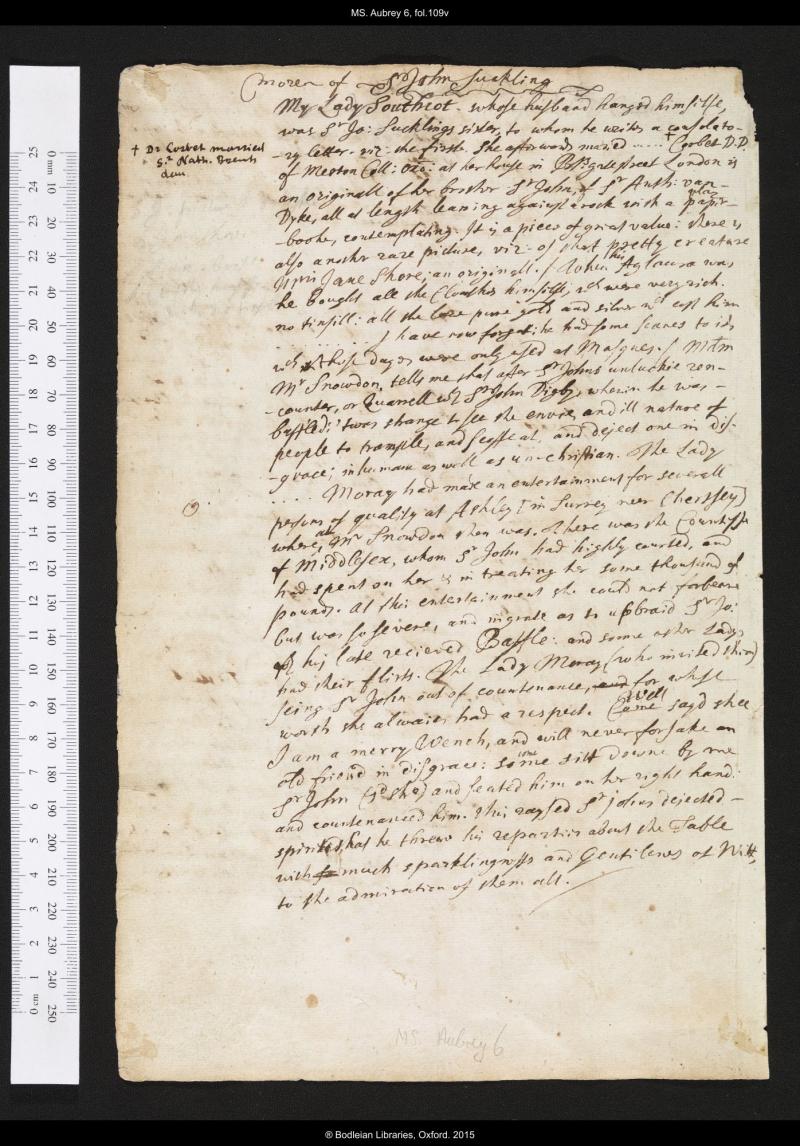 SHAKESPEARE DOCUMENTED IS STILL GROWING! Descriptive content and transcriptions will continue to be added, updated and expanded. Check back for regular updates!

Mr. William Shakespear.                        109            78
was borne at Stratford vpon Avon in the County of Warwic
his father was a Butcher, & I haue been told heretofore by some
of the neighbours that when he was a boy he exercised his fathers-
Trade, but when he kill'd a Calfe he would doe it in a high style, &
make a Speech. There was at that time another Butchers son in
this Towne that was held not at all inferior to him for wi a naturall
witt, his acquaintance & coetanean; but dyed young. This William
being inclined naturally to Poetry and acting, came to London
I guesse about 18: and was an Actor at one of the Play-houses
and did acte exceedingly well: now Ben Iohnson was never
a good Actor, but an excellent Instructor.  He began early to -
make essayes at Dramatique Poetry, which at that time was very
lowe; and his Playes tooke well: He was a handsome, well
shap't man: very good company, and of a very readie and
pleasant smooth Witt. The Humour of ……. the Constable
in a Midsomersnight's Dreame, he happened to take at
*I thinke it was Mid-       *Grendon in Bucks which is the roade from London to Stratford
somer night that he-
happened to lye there.     and there was living that Constable about 1642 when I
first came to Avon. Mr Ios: Howe is of that parish and knew him.
Ben Iohnson and he did gather Humours of men dayly
where euer they came. One time as he was at the Tavern
at Stratford super Avon, one Combes, an old rich Usurer
was to be buryed. He makes there this extemporary Epitaph
Ten in the Hundred the Devill aIlowes
But Combes will haue twelue he sweares & vowes:
If any one askes who lies in this Tombe:
Hoh! quoth the Devill, 'Tis my Iohn o'Combe.
He was wont to goe to his native Country once a yeare:
I thinke I have been told that he left 2 or 300l per annum there
and thereabout: to a sister. I have heard Sir William Dave-
V. his Epitaph                 -nant and Mr. Thomas Shadwell (who is counted the best Co-
in Dugdals Warw.           -moedian we have now) say that he had a most prodigious Witt,
and did admire his naturall parts beyond all other Dramaticall
B. Iohnsons Vnder-         writers. He* was wont to say. That he never blotted out a line
- woods.                          in his life: sayd Beniamin Iohnson. I wish he had blotted out a thou-
-sand. His Comoedies will be W repaire witt, as long as the English
tongue is understood: where our for that he handles mores hominum: now
our present writers reflect to much on particular persons, &
coxcombeities,  that 20 yeares hence, they will not be understood.
Though, as Ben Iohnson sayes of him. that he und had little Latine and
from Mr...Beeston.          lesse Greek; He understood Latine pretty well: for he had been in his younger
yeares a Schoolmaster in the Countrey.

Moren of Sir Iohn Suckling
My Lady Southcot. whose husband hanged himselfe,
was Sir Iohn Sucklings sister, to whom he writes a consolato-
+ Dr. Corbet married       -ry letter viz: the first . She afterward maried ……+ Corbet D.D.
Sir Nath. Brents        of Merton College oxon: at her house in Bishopsgate street London is
daughter                an originall of her brother Sir John, of Sir Anthony van-
Dyke, all at length leaning against a rock with a play papir
-booke, contemplating. It is a piece of great value: there is
also anothr rare picture, viz: of that pretty creature
Mistress Iane Shore; an originall. / When his Aglaura was
he bought all the Clouthes himselfe, which were very rich.
no tinsill: all the lace pure gold and silver which cost him
. . . . . . . . I haue now forgott: he had some scanes to it
which these dayes were only used at masques. / Memorandum
Mr Snowdon. tells me that after Sir Iohns unluckie ren-
-counter, or Quarrell with Sir Iohn Digby, wherin he was-
baffled: ‘twas strange to see the envie, and ill nature of
people to trample, and scoffe at, and deject one in dis-
-grace; inhumane as well as un-christian. The Lady
. . . . Moray had made an entertainment for severall
persons of quality at Ashley (in Surrey neer Chertsey)
where^ at Mr Snowden then was. There was the Countesse
of Middlesex, whom Sir Iohn had highly courted, and
had spent on her & in treating her some thousand of
pounds. At this entertainment she could not forbeare
but was so severe, and ingrate as to upbraid Sir John
of his late received Baffle: and some other Ladys,
had their flirts. The Lady Moray (who invited them)
seing Sir Iohn out of countenance, and for whse
worth she alwaies had a respect. Come Well sayd shee
I am a merry Wench, and will never for sake an
old friend in disgrace: so come me sitt downe by me
Sir John (said she) and seated him on her right hand:
and countenanced him. this raysed Sir iohns dejected-
spirites that he threw his reparties about the Table
with so much sparklingnesse and Gentilenes of Witt,
to the admiration of them all./