Anthony Scoloker, "Epistle to Daiphantus, or the Passions of Love," 1604

Home Exhibition Playwright, actor & shareholderContemporary accounts and critical responses to plays
Epistle to Daiphantus, or the Passions of Love
1604
Contributed by
Bodleian Library 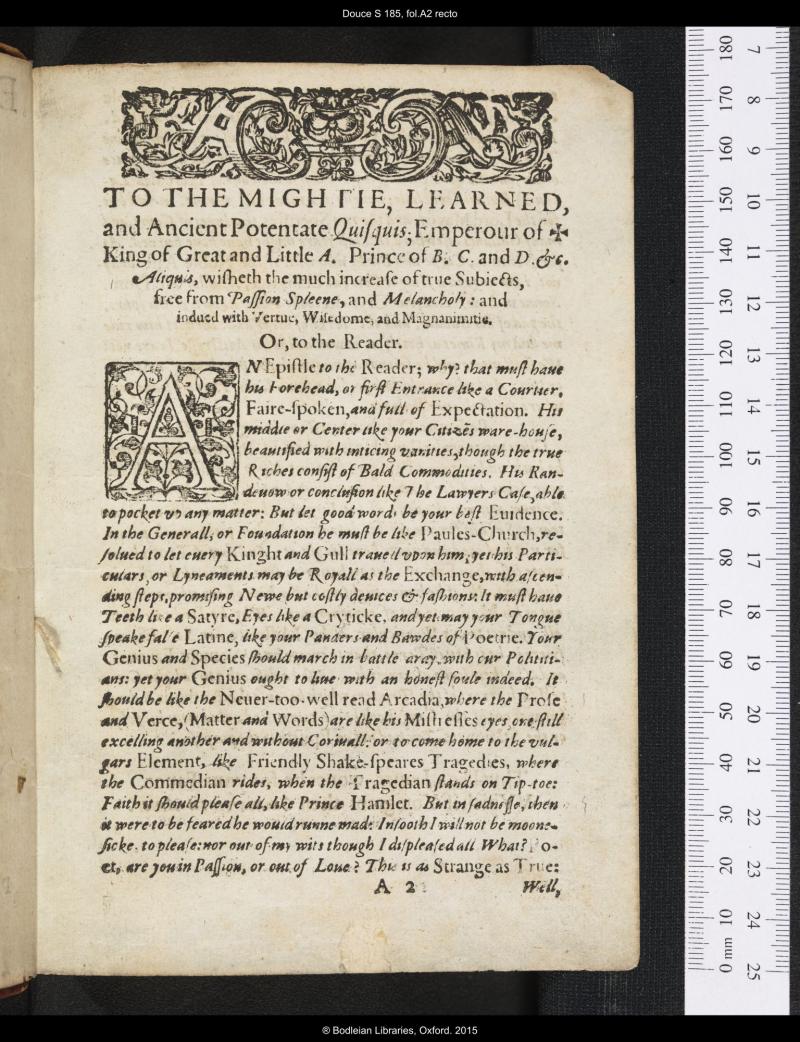 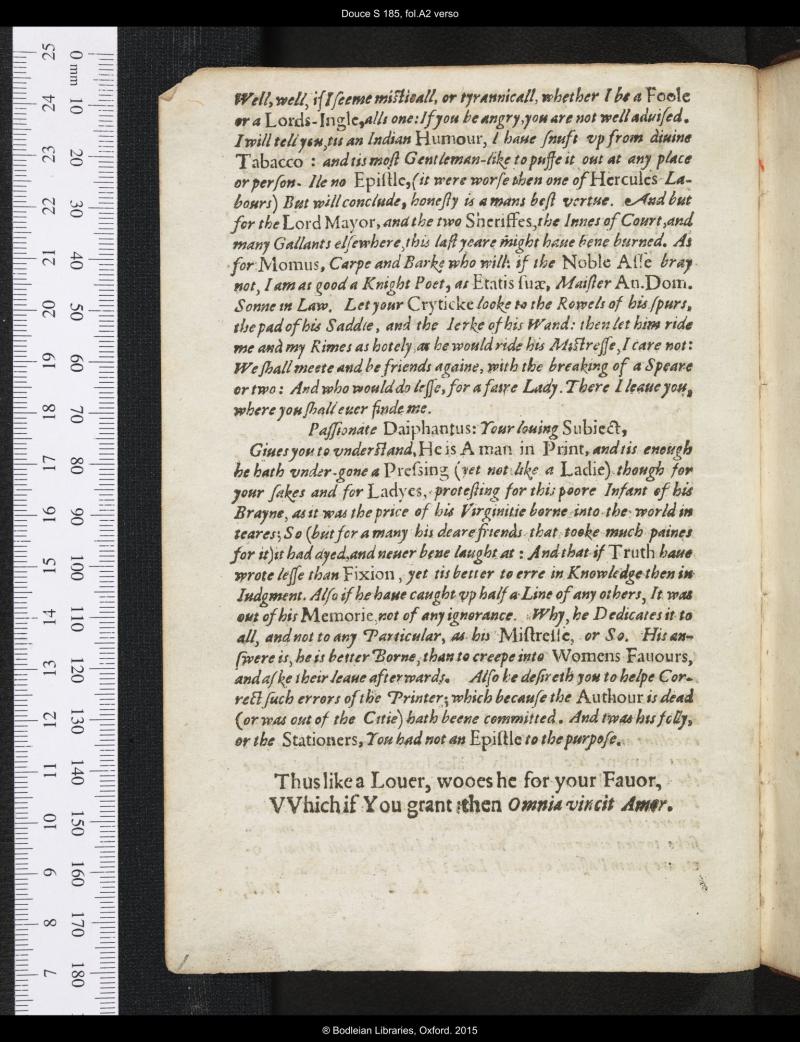 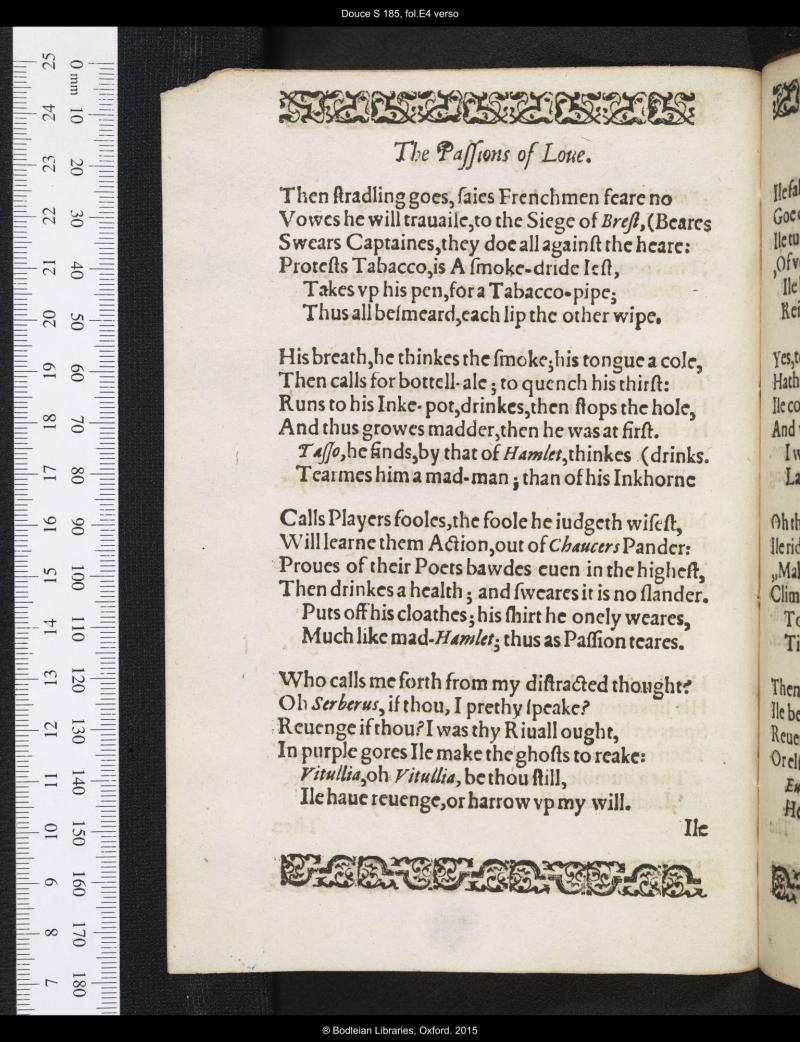 In 1604, Thomas Creede printed a volume of poetry called "Daiphantus, or the Passions of Love" for publisher William Cotton. The author is identified on the title page as "An. Sc.," but the volume is written in the persona of a foppish young courtier, Daiphantus, named after a character in Sir Philip Sidney's Arcadia. The volume is essentially a burlesque of the lovesick young men commonly depicted in drama and love poetry of the time; Shakespeare's Prince Hamlet, introduced in print for the first time in 1603, figures as a particularly prominent example.

In the prose "Epistle" introducing the volume, Daiphantus includes a lengthy digression on the characteristics of an ideal epistle, writing that:

It should be like the Neuer-too-well read Arcadia, where the Prose and Verce (Matter and Words) are like his Mistresses eyes, one still excelling another and without Coriuall, or to come home to the vulgars Element, like Friendly Shake-speares Tragedies, where the Commedian rides, when the Tragedian stands on Tip-toe: Faith it should please all, like Prince Hamlet.

The poem itself includes two mentions of Hamlet, in consecutive stanzas on folio E4 verso:

His breath, he thinkes the smoke; his tongue a coale,
Then calls for bottell-ale; to quench his thirst:
Runs to his Inke-pot, drinkes, then stops the hole,
And thus growes madder, then he was at first.
Tasso, he finds, by that of Hamlet, thinkes, (drinks.
Tearmes him a mad-man; then of his Inkhorne [drinks.]

Calls Players fooles, the foole he judgeth wisest,
Will learne them Action, out of Chaucers Pander:
Proues of their Poets bawdes euen in the highest,
Then drinkes a health; and swears it is no slander.
Puts off his cloathes; his shirt he onely weares,
Much like mad-Hamlet; thus as Passion teares.

The mention of Daiphantus taking off his clothes until "his shirt he onely weares" echoes Ophelia's description of Hamlet (starting at act 2, scene 1, line 87), as the poem explicitly says, and there are numerous other allusions to the character of Hamlet and to Shakespeare's play, as detailed by Josephine Roberts in her 1978 article. For example, Daiphantus expresses scorn for women, much as Hamlet does, and also makes bawdy jokes similar to Hamlet's. Daiphantus also imagines himself as a ghost crying out for revenge, in a passage that contains numerous echoes of Hamlet's encounters with his father's ghost.

In 1807, Francis Douce was the first scholar to discuss Daiphantus in a Shakespearean context. He suggested that the "An. Sc." identified on the title page as the author was "Anthony Scoloker, a printer", and this identification has been repeated by virtually all scholars who have discussed the poem since then. However, while Anthony Scoloker was a printer who established the first press at Ipswich and translated several works from German, this man died in 1593, so he could not have been the author of Daiphantus. There is no evidence for anybody else of that name being the author either, nor does the Short Title Catalogue list any authors whose names begin with "An. Sc.", so the authorship of Daiphantus must remain unknown unless new evidence comes to light. 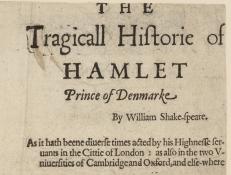