Stationers' Register entry for the First Folio (16 of Shakespeare's comedies, histories, and tragedies) 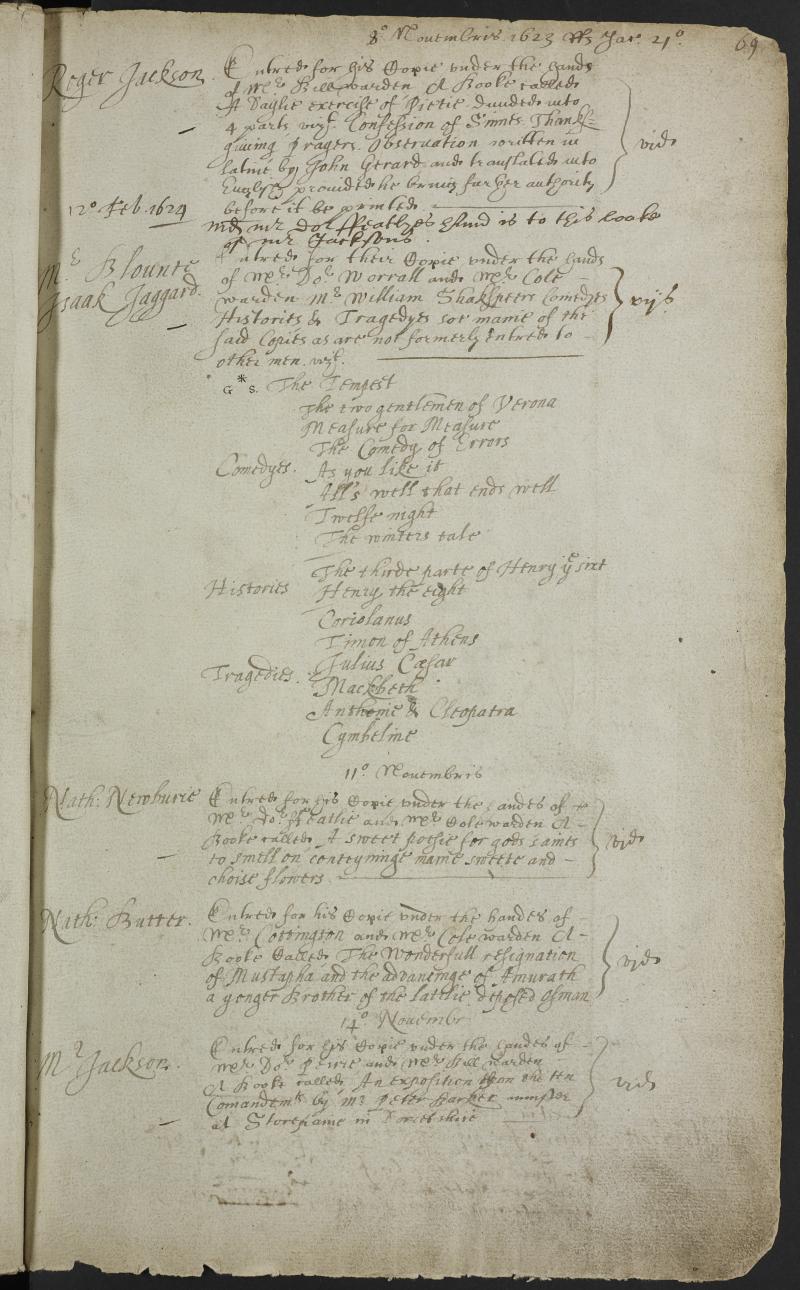 The First Folio, which represents the first printed collection of 16 of Shakespeare’s plays, was entered into Liber D of the Stationers' Company on November 8, 1623. Edward Blount and Isaac Jaggard, the London publishers who produced the First Folio, entered it as "Mr William Shakespeers Comedyes Histories, and Tragedyes." This is the first time Shakespeare's name appears in the Stationers' Register after his lifetime. His name also appears in four entries during his lifetime. The entry includes the following 16 plays (eight comedies, two histories, and six tragedies), noted as “not formerly entred to other men”: The Tempest; The Two Gentlemen of Verona; Measure for Measure; The Comedy of Errors; As You Like It; All’s Well that Ends Well; Twelfth Night; The Winter’s Tale; Henry VI Part 3; Henry VIII; Coriolanus; Timon of Athens; Julius Caesar; Macbeth; Antony and Cleopatra; and Cymbeline. Many of these plays were issued in quarto after the publication of the First Folio. The Second Folio, containing these plays plus 20 more, was issued in 1632.

Liber D and the other registers with Shakespeare’s works are still kept by the Stationers’ Company in their archives.

Roger Jackson      Entred for his Copie vnder the hands of
Mr Bill warden, A Booke called
A Daylie exercise of Pietie Diuided into 4
parts, vizt. Confession of Sinnes Thanks=
giuing Prayers. Obseruation written in
Latine by John Gerard and translated into
English prouided he bring further authority
before it be printed . . . . vjd

Nath: Newburie   Entred for his Copie vnder the handes of
Mr Dor ffeatlie and Mr Cole warden, A
Booke called, A sweet poesie for gods saints
to smell on, conteyninge manie sweets and
choise flowers . . vjd

Nath: Butter       Entred for his Copie vnder the handes of
Mr Cottington and Mr Cole warden, A
Booke Called, The Wonderfull resignation
of Mustapha and the advancinge of Amurath
a yonger Brother of the latelie deposed Osman . . . . vjd