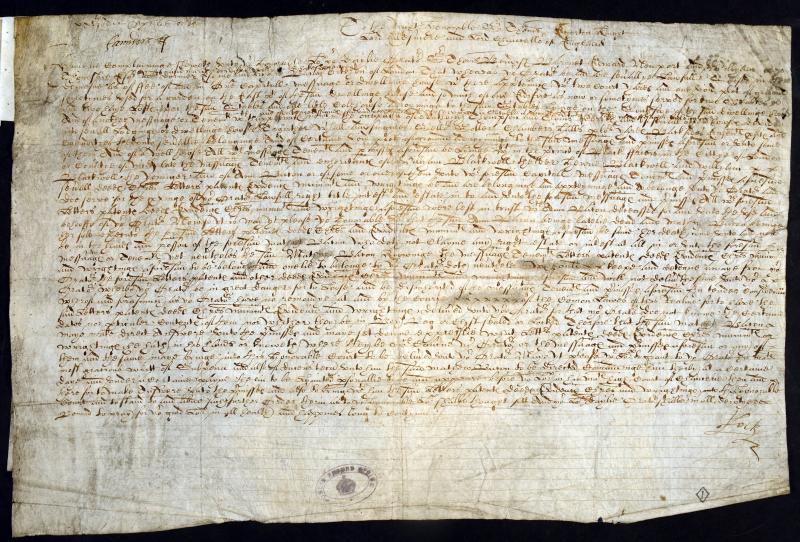 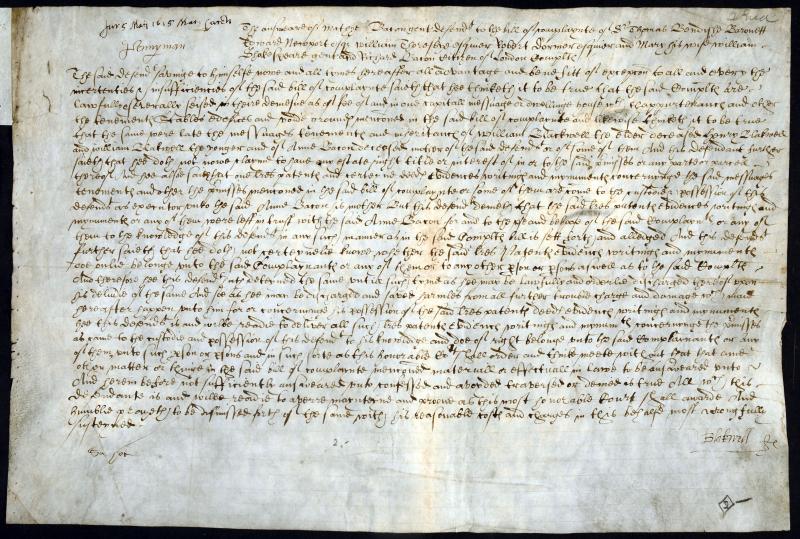 In 1613 William Shakespeare, with the assistance of three trustees, purchased the gatehouse in the Blackfriars neighborhood of London, evidently as an investment. As a new owner, Shakespeare was entitled to receive any and all legal instruments (or documents) associated with the property, including indentures of earlier purchases. Only by having all such instruments in his possession could an owner defend against rival claimants. But Shakespeare had acquired the gatehouse without its associated documents. In fact he was the fifth of six owners of Blackfriars properties who went to court with the very same problem on April 26, 1615. The document shown here includes both a Bill of Complaint and an Answer, two steps in the pleadings of a lawsuit. Both documents style Shakespeare as “gent.”

The Bill of Complaint, made on April 26, 1615, lists Shakespeare as one of many owners:

The complainants alleged that “Letters patentes Deedes Evidences Chartres munimentes and Wrightinges … were left in trust with Ann Bacon deceassed for and vnto the vse and behoofe of Your Orators,” and that the same legal instruments were now in the hands of Matthew Bacon, her son and sole executor.

The lawsuit was evidently a simple legal maneuver undertaken with friendly intent, as Brend acknowledged in his Answer, dated May 5, 1615:

Bendishe et al. v. Bacon provides incidental verification of William Shakespeare’s ownership of property in Blackfriars. Although the lawsuit does not explicitly name his acquisition in 1613 of Blackfriars gatehouse, it does reveal that Shakespeare took an active interest in his London property a year before his death in April 1616, an interest even more explicitly mentioned in his will.

Humbly complaining, sheweth unto your Honorable Lordship your daily orators Sir Thomas Bendish Baronet, Edward Newport and William
Thoresby Esquire, Robert Dormer Esquire, ^and Marie his wife, and William Shakespeare gent., and Richard Bacon citizen of London. That whereas your orators be and are severally lawfully seised in their
demesne as of fee of and in one capital messuage or dwelling house with their appurtenances with two court yards and one void plot of ground
sometimes used for a garden on the east part of the said dwelling house, and so much of one edifice as now or sometimes served for two stables
and two hay lofts over the said stables, and one little coal house adjoining to the said stables lying on the south side of the said dwelling house
and of another messuage or tenement with the appurtenances now in the occupation of Anthony Thompson and Thomas Peakes(?) ^and of their assigns, and of a void piece of ground whereupon a stable is erected to the said messuage belonging and of several other houses divided
into several lodgings or dwelling houses, together with all and singular sellers, solars, chambers, halls, parlors, yards, backsides, easementes, profits, and
commodities thereunto severally belonging, and of certain void plots of ground adjoining to the said messuages and premises aforesaid or unto some
of them. And of a well house. All which messuages, tenements, and premises aforesaid be lying within the precinct of Blackfriars in the city of London
or County of Middlesex, late the messuages, tenements, and inheritances of William Blackwell the elder Henry Blackwell and William
Blackwell the younger, and of Ann Bacon, or of some or one of them, unto which foresaid capital messuages, tenements, and premises aforesaid
several deeds, charters, letters patents, evidences, muniments and writings be and are belonging and appertaining and do belong unto your orators and
do serve for the proving of your orators’ lawful right, title, interest, and estate in, to, and unto the foresaid messuages and premises. All which foresaid
letters patents, deeds, evidences, charters, and muniments, writings aforesaid, were left in trust with Ann Bacon deceased for and unto the use and
behoof of your orators. Now, so it is, may it please your honorable Lordship, that the said Ann Bacon being lately dead and Mathy Bacon being
her sole executor, the foresaid letters patents, deeds, charters, and evidences, muniments, and writings aforesaid be since her death come unto and now
be in the hands and possession of the aforesaid Mathey Bacon, who doth not claim any right, estate, or interest at all in or unto the foresaid
messuages or tenements, yet nevertheless the said Mathy Bacon, knowing the messuages, tenements, letters patents, deeds, evidences, charters, muniments,
and writings aforesaid to be belonging and only to belong to your orators, doth nevertheless withhold, keep, and detain away from your
orators the foresaid letters patents and other deeds, evidences, charters, muniments, and writings aforesaid, and will not deliver the same unto your
orators, whereby your orators be in great danger for to lose and be disinherited of the messuages, tenements, and premises aforesaid. In tender consideration
whereof, and for as much as your orators have no remedy at and by the course of the common laws of this realm, for to have the
said letters patents, deeds, charters, muniments, evidences, and writings delivered unto your orators, for that your orators do not know the certain
dates nor particular contents of them, nor whether they be in box, bag, or chest sealed or locked. Therefore that the said Mathy Bacon
may make direct answer unto the premises, and may set down expressly what letters patents, deeds, evidences, charters, muniments, or
writings he hath in his hands, or knoweth where they be, which concern your orators, or the messuages and premises aforesaid, or any of
them, and the same may bring into this honorable court to be delivered unto your orators. May it please your Lordship to grant to your orators his Majesty’s
most gracious writ of subpoena, and also of ducens tecum, unto him the said Matthew Bacon to be directed, commanding him thereby at a certain
day and under a certain pain therein to be limited, personally to be and appear before your Lordship in his Majesty’s High Court of Chancery, then and
there for to make answer unto the premises, and also to bring with him the said letters patents, deeds, evidences, charters, and writings into this honorable
court, and to stand to and abide such further order therein as to your honorable Lordship shall be thought fit. And your Lordship’s daily orators shall be in all duty
bound to pray for your good Lordship in all health and happiness long to continue.
Lock

[This transcription is pending final vetting]
[Transcriptions based on B. Rowland Lewis, Shakespeare Documents, ii, 467-71.] 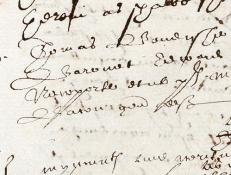