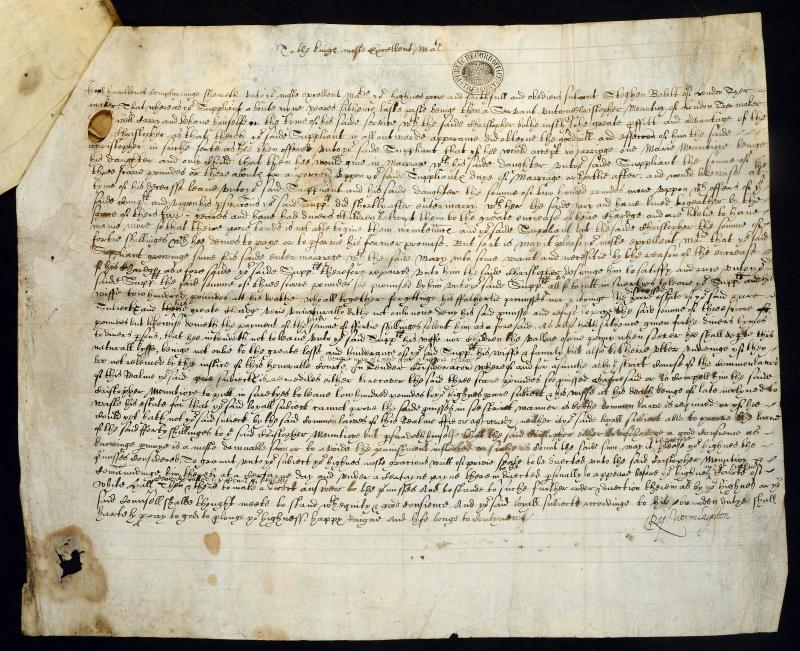 Shown here is Stephen Bellott’s Bill of Complaint dated January 28, 1612, the first of four pleadings in Bellott v. Mountjoy. The lawsuit, for which this document marks the first step, was between Stephen Bellott and Christopher Mountjoy, head of a French Huguenot family living in Silver Street in Cripplegate Ward, just north of Cheapside and St. Paul’s Cathedral. Members of the household included Christopher and Marie Mountjoy, their only child Mary, and Stephen Bellott, an apprentice in the family business, the fabrication of elaborate and fashionable headpieces called “tires.” The lawsuit concerns negotiations which led to the marriage of Stephen and Mary on November 19, 1604. Bellott complains that his father-in-law subsequently reneged on an agreement to support the young couple financially. On May 11, 1612, William Shakespeare deposed as a witness. Depositions in the case reveal that Shakespeare, then a lodger in the Mountjoy household, had been engaged to persuade Bellott to enter the marriage.

Here, Bellott complains that Mountjoy, Mary’s father, failed to provide the couple with a dowry of £60 as promised before the wedding, and/or a bequest of £200 in his will.

Twenty-six documents survive from Bellott v. Mountjoy. Twelve of these refer to Shakespeare explicitly or implicitly (including one document with his signature), although the document shown here does not. The lawsuit is generally unremarkable and Shakespeare’s involvement is minor. However, the case does contribute to our understanding of Shakespeare's life: that in 1604 he was living in Silver Street with a family of French Huguenot tiremakers. In 1909 Charles William Wallace and his wife Hulda Berggren Wallace discovered Bellott v. Mountjoy in the Public Records Office, now The National Archives.

[This transcription is pending final vetting. Transcriptions of Bellott. v. Mountjoy are based on Charles William Wallace, "Shakespeare and his London Associates, As Revealed in Recently Discovered Documents," University of Nebraska Studies, 10 no. 4 (1910), 260-360. This publication has a secondary pagination, followed here for individual entries: pp. 7-10.]]

To the Kinges moste Excellent Maiesty
In all humblenes Complayninge sheweth vnto your moste excellent Maiestie your Highnes poore and faythfull and obedient suppliant Stephen Belott of London Tyer-
maker, That whereas your Suppliant aboute nyne yeares sithence laste paste beinge then a Servant vnto one Christopher Mountioy of London Tyer maker
[who did] well Carry and behaue himselfe in the tyme of his saide service with the saide Christopher bothe iustly ^& to the greate proffitt and advantage of the
[said] Christopher, as that thereby your saide Suppliant in all outwarde appearance did obteyne the good will and effecion of him the saide
Christopher in suche sorte as hee then offered vnto your saide Suppliant, that yf hee would accept in marriage one Marie Mountioye beinge
his daughter and only Child that then hee would giue in Marriage with his saide daughter vnto your saide Suppliant the somme of
three scoore poundes or there aboutes for a porcion vppon your saide Suppliantes daye of Marriage or shortlie after, and would likewise at ^the
tyme of his deceasse leaue vnto your said Suppliant and his saide daughter the somme of two hundred poundes more vppon which offers of ye
saide Complainant and vppon his perswacions your said Suppliant did shortly after entermarry with her the saide Mary and haue liued togeather by the
space of theis five [five added later?] yeares and haue had diuers Children betwixt them to the greate encrease of theire Chardge and are likelie to haue
manie more so that theire poore trade is not able to giue them maintenaunces  and your saide Suppliant lent the saide Christopher the somme of
fortie shillinges which hee denies to paye or to performe his former promise,  But so it is may it please your moste excellent Maiestie that your said
Suppliant growinge since his saide entermarriage with the saide Mary into some want and necessitie by the reason of the encrease
of his Chardge as a fore saide  your saide Suppliant therefore repaired vnto him the saide Christopher desiringe him to satisfy and paye vnto your
saide Suppliant the said somme of three scoore poundes soe promised by him vnto your saide Suppliant ^as all so to putt in suertyes to leaue your Suppliant and his
wiffe tow hundred poundes att his deathe, who all together forgettinge his ffatherlie promisses nor pityinge the ^distressed & poore estate of your said poore
Subiectes and theire ^his greate Chardge verie vnnaturally dothe not only nowe deny his said promisse and refuse to paye the said somme of three scoore of
poundes but likewise denieth the payment of the ^saide somme of ffortie shillinges so lent him as a fore said.  As allso hath sithence giuen forthe diuers tymes
to diuers persons, that hee intendeth not to leaue vnto your said Suppliant his wiffe nor Children the vallue of one penny when soever hee shall departe this
naturall lyffe, beinge not onlie to the greate losse and hinderance of your said Suppliant his wiffe & famyly, but alsoe to theire vtter vndoeinge yf they
bee not releiued by the iustice of this honorable Courte, ^& being a man of good estat & without charge. In Tender Consideracion whereof and for asmuche as by ye strict Course of the Common lawes
of this Realme your said pore subiectes is remediles either to recover the said three scoore poundes soe promissed as aforesaid or to Compell him the saide
Cristopher Mountioye to putt in suretyes to leaue tow hundred poundes to your highnes poore subiect & his wiffe at his death beinge of late inclyned to
waste his estate for that your said loyall subiect cannott prove the saide premisses in soe strict manner as by the Common lawe is required  or yf hee
Could yet hath not your said subiect by the said Common lawes of this Realme ffitt or apt remedy  neither is your saide loyall subiect able to parove [sic for prove] the loane
of the said fforty shillinges to ye said Christopher Mountioye but perswadeth himselfe that the said Christopher either to dischardge a good Conscience as
knowinge periurye is a moste damnable sinn or to avoide the punishment inflicted on suche as Comit the saide sinn, may it ^therefore please your highnes the
premisses Considered, To graunt vnto your subiect your highnes moste gracious writt of privie seale to be directed vnto the said Christopher Mountioy
Commaundinge him thereby at a Certayne day and vnder a Certayne payne therein ^to be directed personally to appeare before your highnes ^in your highnes Courte of
White Hall ^Comonlie called the Court of Requestes Then & there to make a direct answer to the premisses And to stande to suche further order & direction therein as by your highnes or your
said Counsell shalbe thought meete to stand with equity & good conscience, And your said loyall subiecte accordinge to his bounden dutye shall
hartely pray to god to prolonge your highness happy Raigne and lyfe longe to Contynewe./
(signed) Rap: Wormlaighton

Charles William Wallace, "Shakespeare and his London Associates, as Revealed in Recently Discovered Documents" University of Nebraska Studies 10, no. 4 (1910): 8-10. 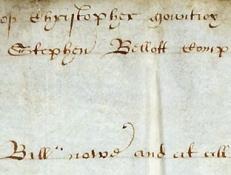 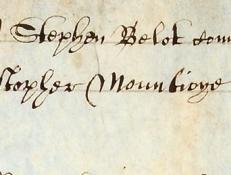 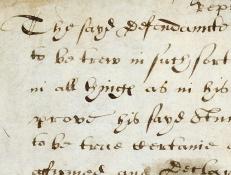 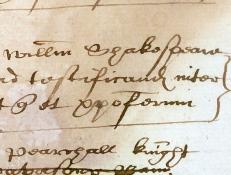 Bellott v. Mountjoy: Compulsory Summons to Shakespeare and others for the first set of Interrogatories
1612 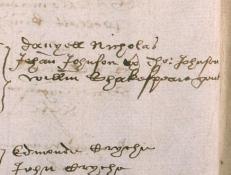 Bellott v. Mountjoy: Witness Book listing Shakespeare and others to be examined on Bellott's behalf in Easter Term
1612 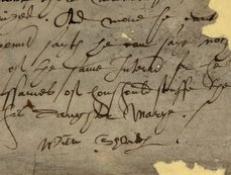 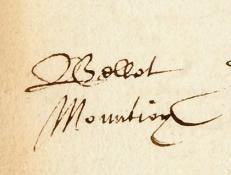 Bellott v. Mountjoy: Order to publish first set of depositions on Bellott's behalf and for the case hearing
1612 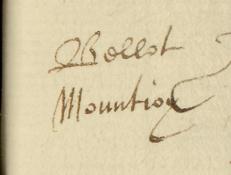 Bellott v. Mountjoy: Order for postponing the publication and hearing, and to examine further witnesses
1612 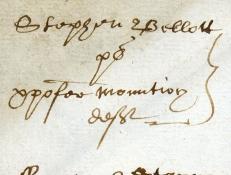 Bellott v. Mountjoy: Witness Book listing those to be examined on Bellott's behalf in Trinity Term
1612 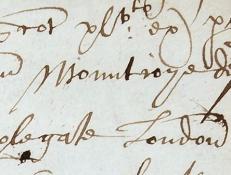 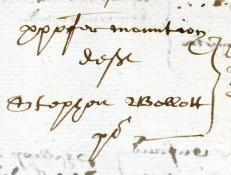 Bellott v. Mountjoy: Witness Book listing those to be examined on Mountjoy's behalf in Trinity Term
1612 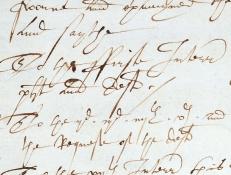 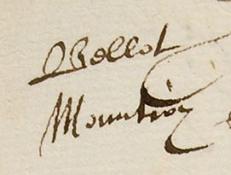