The “Hall of the Queen’s Scholars at Oxford” was founded in 1341 by Robert de Eglesfield, a chaplain in the household of Queen Philippa, who named it in her honor. He envisaged an establishment of fellows, chaplains, “poor boys” and various officials and servants, headed by a Provost. Membership was to be open, but with a preference for inhabitants of Cumberland and Westmorland.

There has been a library at Queen’s ever since its foundation. The Upper Library was built between 1692 and 1695 to house large donations from Thomas Barlow, one-time Provost of the College and later Bishop of Lincoln, and from Sir Joseph Williamson.

The Queen’s College collection is set apart from all other Oxford college libraries thanks to a donation of £30,000 in 1841 by Robert Mason, an Old Member, who stipulated in his will that the money had to be spent solely on the Library within three years. In order to accommodate the large number of volumes purchased with Mason’s bequest, the open arcade below the Upper Library was enclosed (following the designs of Charles Robert Cockerell, professor of architecture at the Royal Academy) to form what is now the Main Library. The Librarian of the time showed exceptional foresight: he not only purchased a great number of modern books, but also a wide selection of the greatest editions of printed books from the fifteenth to the nineteenth century. By the late 1840s Queen’s had what was probably the richest college library collection in the country.

The Queen’s College Library is widely regarded as one of the most beautiful Baroque buildings in Oxford. It also remains a thriving center of College academic life and is exceptional in retaining the seventeenth-century Upper Library as a reading room for students. Refurbishment was crucial both for maintaining such historic grandeur and for enhancing the high quality of its reader services. Originally a part of the planned Library extension, the refurbishment went ahead as a standalone project between June 2013 and January 2014. The project has succeeded in enhancing the Library’s intrinsic character while making it a cleaner, brighter and more inviting environment in which to study.

To learn more about the history of Queen’s College and the Library, please visit their website.

The Queens College Oxford has graciously contributed images from their collections to Shakespeare Documented, and retains sole ownership of said images. The Queens College Oxford welcomes the downloading of the images for personal research purposes but prior permission must be sought from library@queens.ox.ac.uk for use of the images in any form of publication, print or electronic. A fee may be payable for such use. 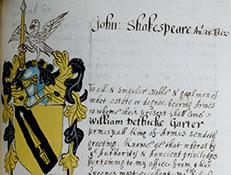