Alnwick Castle has stood in its current location for nearly 1,000 years. It cannot be said for certain when the first castle was constructed, but the popular story is that a Norman man named Gilbert Tyson ruled it in the late 11th century, before its ownership passed to the de Vescys, another Norman family. There was almost certainly a castle on the spot where it now stands by the year 1093, as King Malcolm III of Scotland attempted to take it in that year.

The Percy family purchased Alnwick Castle from the Bishop of Durham in 1309, but they were already a long-standing family in England by that date, and can trace their roots back to before the Norman Conquest of England in 1066. Richard de Percy, the 5th Baron, was one of the lords who opposed the actions of King John prior to the signing of Magna Carta, and so became one of the 25 barons appointed to enforce the observance of the document.

To learn more about Alnwick Castle and the Northumberland Collection and Archive, please visit their wesbite.

Documents contributed by The Northumberland Collection and Archive, Alnwick Castle 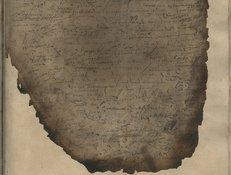 ca. 1598
Shakespeare's name, plays, and poems included in the Northumberland manuscript
SHAKESPEARE DOCUMENTED IS STILL GROWING! Descriptive content and transcriptions will continue to be added, updated and expanded. Check back for regular updates!