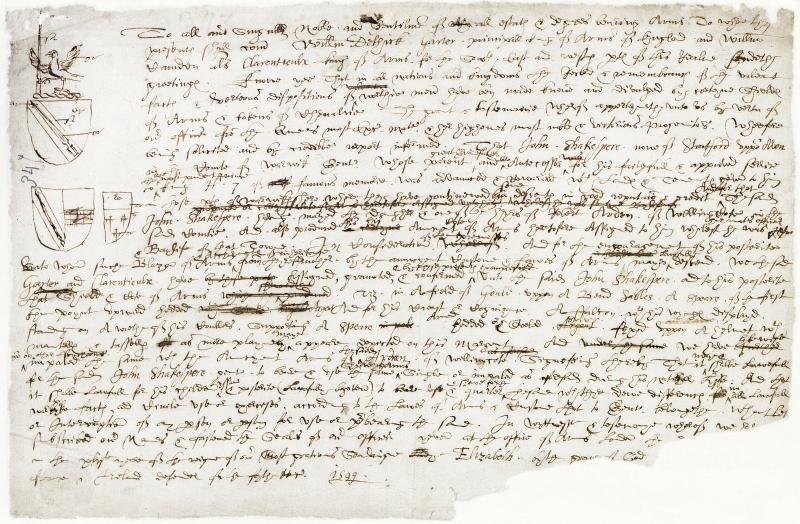 Like the two draft grants of arms from 1596, this draft exemplification of arms from 1599 is in the handwriting of William Dethick, Garter King of Arms. In it, William Dethick and fellow herald William Camden accept John Shakespeare’s application to impale, or combine, the arms of Arden with his own. John Shakespeare’s wife--William’s mother--was from the local Arden family, a step up from the Shakespeares. Including the Arden arms would add luster to the Shakespeare family name. Two Arden coats of arms are drawn on this draft, however. The first, a mistake, is from another family with the Arden name, the Ardens of Park Hall in Warwickshire; the second, added after the error was realized, is the proper arms of the family of Shakespeare’s mother, Mary Arden, who was a daughter of Robert Arden of Wilmcote. We don’t know why Shakespeare did not adopt the impaled (combined) version of the coat of arms.

John Anstis, Garter King of Arms, first identified the confirmation of arms, and supplied the information to Alexander Pope, who provided a transcription (with silent additions and corrections) in The Works of Shakespear (1725). The "no. 347" visible on the grant refers to its prior placement in a volume of similar records, MS Record R21, a volume of "Old Grants." At the time that Anstis shared it with Pope, it had a different shelfmark, MS G13 (Anstis' shelfmark), and according to Pope, was p. 349 of the volume. In 1933, the grant was removed from this volume because of its special interest as a Shakespeare relic. The second half of this large folio includes material that appears to have been gathered by Brooke or someone else, that consists of materials relating to his disputes with Dethick and Segar. The table of contents lists Shakespeare’s grant, which has since been removed, as being between an exemplification and grant of arms by Segar, Norroy, to Thomas Cook of Little Walton in Lancaster, dated 2 January 1602 (fol. 346) and a letter to Sir William Segar, (now Garter) concerning Wolby (fol. 348). It is described as “Grant of Arms by ^Dethick Garter and^ Wm. Camden Clarx. to John Shakespear of Stratford upon Avon, in the County of Warwick Dated Ao. 1599. fo. 347.”

To all and singular Noble and Gentlemen of all estates and degrees bearing Arms, to whom these presents shall come. William Dethick, Garter principal king of Arms of England and William Camden alias Clarenceux king of Arms for the South, East, and West parts of this realm sendeth greetings. Know ye that in all nations and kingdoms, the record and remembrances of the valiant facts and virtuous dispositions of worthy men have been made known and divulged by certain shields of arms and tokens of chivalry, the grant and testimony whereof appertaineth unto us by virtue of our office from the Queen's most excellent majesty and her highness's most noble and victorious progenitors. Wherefore being solicited and by credible report informed that John Shakespeare now of Stratford upon Avon in the county of Warwickshire, gent., whose parent great Grandfather and late Antecessor for his faithful and approved service to the late most prudent Prince King Henry VII of most famous memory, was advanced and rewarded with lands and tenements given to him in those parts of Warwickshire, where they have continued by some descents in good reputation and credit, and for that the said John Shakespeare having married the daughter and one of the heirs of Robert Arden of Wellingcote in the said county, and also produced this his ancient coat of arms heretofore assigned to him whilst he was her majesty's officer and bailiff of that town. In consideration of the premisses and for the encouragement of his posterity unto whom such blazon of arms and achievements of inheritance from their said mother, by the ancient custom and laws of arms may lawfully descend, we the said Garter and Clarenceux have by these assigned, granted, and confirmed, & by these presents exemplified unto the said John Shakespeare and to his posterity that shield and coat of arms viz. in a field of gold, upon a bend sables, a spear of the first, the point upward headed, Argent, and for his crest or cognizance, a falcon with his wings displayed, standing on a wreath of his colors, supporting a spear armed headed, Or, & steeled silver, fixed upon a helmet with mantels and tassels as more plainly may appear depicted on this margin. And we have likewise upon one other escucheon impaled the same with the ancient arms of the said Arden of Wellingcote, signifying thereby that it may and shall be lawful for the said John Shakespeare, gent., to bear and use the same shield of arms, single or impaled as aforesaid during his natural life. And that it shall be lawful for his children, issue, and posterity (lawfully begotten) to bear, use, and quarter & show forth the same, with their due differences, in all lawful war-like facts, and civil use or exercises, according to the laws of Arms and custom that to gentlement belongeth. Without let or interruption of any person or persons for use or for bearing the same. In witness and testimony whereof we have subscribed our names and fastened the seals of our offices. Given at the office of Arms London the [damage] in the 42nd year of the reign of our most gracious sovereign Elizabeth, by the grace of God [damage] France, and Ireland, defender of the faith, etc. 1599.

To all and Singullar Noble and Gentilmen of wha all estates & degrees bearing Arms. To whom these

greetinges. Knowe yee That in all Nations and kingdoms the Record & remembrances of the valeant

our office from the Queens most Excellent Maiestie & her highenes most noble & victorious Progenitors. Wherefore

being solicited and by credible report informed. That John Shakespere nowe of Stratford vppon Avon

in the Counte of Warwik Gent. Whose parent ^ great Grandfather and ^ late Antecessor ^ was for his faithefull & approved service

to ^ the ^late^ most prudent Prince King Henry 7 of most famous memorie. Was advaunced & Rewarded with Landes & Tenementes given to him

in those partes of Warwikesshere. Where they have continewed in by ^ some descentes in good reputacion & credit ^ And for that The said

John. Shakespere. having. maryed the daughter & one of the heyres of Robert Arden. of Welling Cote in the

said Countie. And also produced a certeyne this his Auncyent Cote of Arms heretofore Assigned to him whilest he was ^ her maiesties officer Iustice

& Baylife of that Towne. In Consideration. of the premisses Whereof. And for the encouragement of his posteritie

Vnto whom suche Blazon of Arms ^ & Atchevementes of inheritance from theyre said mother. by the auncyent Custome & Lawes of Armes ^ in this Realme maye ^ lawfully descend. We the said

Garter and Clarentieulx have by these pates Assigned, graunted, & confirmed ^ & by these presentes Exemplified. Vnto the said John Shakespere. and to his posteritie

that Armes of Shielld & Cote of Arms whiche he ^ shewed & produced. viz. in A field of Gould. vppon A Bend Sables. A Speare. of the first

the poynt vpward hedded with Stele. argent proper Argent And for his Creast or Cognizance. A ffalcon. With his wynges displayed.

standing on A wrethe of his Coullers. Supporting A Speare in pale. Armed hedded or & steeled. Argent. sylver. fyxed vppon A helmet with

Mantelles & tasselles of as more playnely ^ maye appeare depicted on this Margent. And vnder the same We have further lykewise

vpon on other Escucheone. ^ impaled the same with the Auncyent Arms of ^ the said Ardnen. of Wellingcote. as aforesaid Signefeing thereby That it ^ maye & shalbe lawefull

for the said John Shakespere gent. to beare & vse the same ^ Shieldes of Arms. Single or impaled as aforesaid during his Naturall lyffe: And that

it shalbe lawfull for his children ^ yssue & posterite (lawfully begotten) to beare vse & quarter ^ & shewe forthe the same. With theyre dewe differences. for ^ in all lawfull

warlyke factes, and Ciuile vse or exercises, according to the lawes of Arms & Custome that to Gent. belongethe. Without let

or Interruption of any person or persons for vse or pre bearing the same. In Wyttnesse & testemonye wherof we have

subscribed our Names & fastened the Seales of our offices.  Yeven at the office of Arms London the [damage]

in the xlijte yeare of the reigne of our Most gratious Soueraigne Lady Elizabeth. by the grace of God [damage] 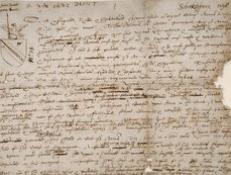 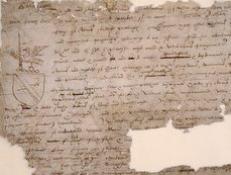