Greenes, groats-worth of witte: First printed allusion to Shakespeare as a playwright 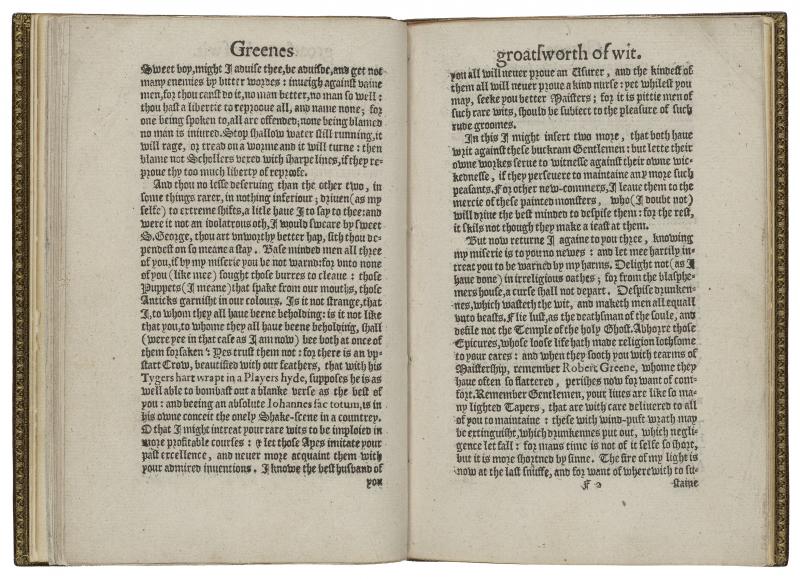 Terms of use
Images that are under Folger copyright are licensed under a Creative Commons Attribution-ShareAlike 4.0 International License. This allows you to use our images without additional permission provided that you cite the Folger Shakespeare Library as the source and you license anything you create using the images under the same or equivalent license. For more information, including permissions beyond the scope of this license, see Permissions. The Folger waives permission fees for non-commercial publication by registered non-profits, including university presses, regardless of the license they use. For images copyrighted by an entity other than the Folger, please contact the copyright holder for permission information.

Copy-specific information
Title: Greenes, groats-vvorth of witte, bought with a million of repentance. Describing the follie of youth, the falshood of makeshifte flatterers, the miserie of the negligent, and mischiefes of deceiuing courtezans. Written before his death and published at his dyeing request.
Date: London : imprinted [by J. Wolfe and J. Danter] for William Wright, 1592.
Repository: Folger Shakespeare Library, Washington, DC, USA
Call number and opening: STC 12245, sig. F1v-F2r
View online bibliographic record

Sweet boy, might I aduise thee, be aduisde, and get not
many enemies by bitter wordes : inueigh against vaine
men, for thou canst do it, no man better, no man so well :
thou hast a libertie to reprooue all, and name none; for
one being spoken to, all are offended; none being blamed
no man is iniured. Stop shallow water still running, it
will rage, or tread on a worme and it will turne : then
blame not Schollers vered with sharpe lines, if they re=
proue thy too much liberty of reproofe.
And thou no lesse deseruing than the other two, in
some things rarer, in nothing inferiour ; driuen (as myselfe)
to extreme shifts,a litle haue I to say to thee: and
were it not an idolatrous oth, I would sweare by sweet
S. George, thou art vnworthy better hap, sith thou de=
pendest on so meane a stay. Base minded men all three
of you, if by my miserie you be not warnd: for vnto none
of you (like mee) sought those burres to cleaue : those
Puppets (I meane) that spake from our mouths, those
Anticks garnisht in our colours. Is it not strange, that
I, to whom they all haue beene beholding: is it not like
that you, to whome they all haue beene beholding, shall
(were yee in that case as I am now) bee both at once of
them forsaken : Yes trust them not : for there is an vp=
start Crow, beautified with our feathers, that with his
Tygers hart wrapt in a Players hyde, supposes he is as
well able to bombast out a blanke verse as the best of
you : and beeing an absolute Iohannes fac totum, is in
his owne conceit the onely Shake-scene in a countrey.
O that I might intreat your rare wits to be imploied in
more profitable courses : & let those Apes imitate your
past excellence, and neuer more acquaint them with
your admired inuentions. I knowe the best husband of
you

you all will neuer proue an Usurer, and the kindest of

them all will neuer proue a kind nurse : yet whilest you
may, seeke you better Maisters; for it is pittie men of
such rare wits, should be subiect to the pleasure of such
rude groomes.
In this I might insert two more, that both haue
writ against these buckram Gentlemen : but lette their
owne workes serue to witnesse against their owne wic=
kednesse, if they perseuere to maintaine any more such
peasants. For other new-commers, I leaue them to the
mercie of these painted monsters, who (I doubt not)
will driue the best minded to despise them : for the rest,
it skils not though they make a ieast at them.
But now returne I againe to you three, knowing
my miserie is to you no newes : and let mee hartily in=
treat you to be warned by my harms. Delight not (as I
haue done) in irreligious oathes ; for from the blasph=
mers house, a curse shall not depart. Despise drunken=
nes which wasteth the wit, and maketh men all equall
vnto beasts. Flie lust, as the deathsman of the soule, and
defile not the Temple of the holy Ghost. Abhorre those
Epicures, whose loose life hath made religion lothsome
to your eares : and when they sooth you with tearms of
Maistership, remember Robert Greene, whome they
haue often so flattered, perishes now for want of com=
fort. Remember Gentlemen, your liues are like so ma=
ny lighted Tapers, that are with care deliuered to all
of you to maintaine : these with wind-puft wrath may
be extinguisht, which drunkennes put out, which negli=
gence let fall : for mans time is not of it selfe to short,
but is more shortned by sinne. The fire of my light is
now at the last snuffe, and for want of wherewith to su
=staine