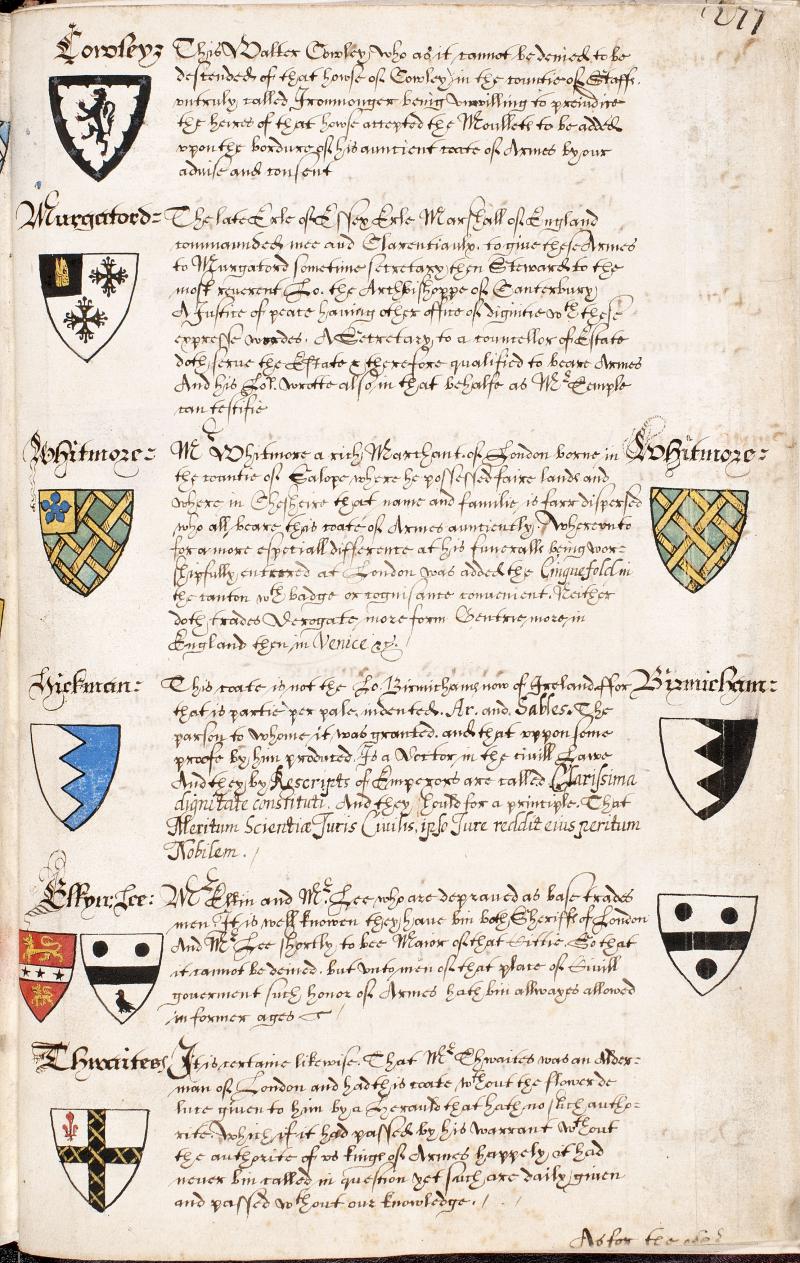 This Walter Cowley, who as it cannot be denied to be descended of that house of Cowley in the county of Staffordshire, untruly called ironmonger, being unwilling to prejudice the heirs of that house, accepted the mullets to be added upon the bordure of his ancient coat of arms by our advice and consent.

The late earl of Essex, Earl Marshal of England, commanded me and Clarencieux to give these Arms to Murgatord, sometime secretary then steward to the most reverent lord, the Archbishop of Canterbury, a justice of peace having other office of dignity, with these express words: A Secretary to a councilor of estate doth serve the estate and therefore qualified to bear Arms. And his Lordship wrote also in that behalf as Mr Temple can testify.

Mr Whitmore, a rich merchant of London born in the county of Shropshire, where he possessed fair lands and where in Cheshire that name and family is far dispersed who all bear this coat of Arms anciently. Whereunto for a more especial difference at his funeral's being worshipfully entered at London, was added the cinquefoil in the canton with the badge or cognizance convenient. Neither doth trades derogate more from Gentry more in England then in Venice, etc.

This coat is not the Lord Birmicham's now of Ireland. For that is party per pale, indented, argent and sables. The person to whom it was granted, and that upon some proof by him produced, is a doctor, in the civil law. And they by Rescripts of Emperors are called Clarissima dignitate constituti. And they hold for a principle, that Meritum Scientiae Juris Civilis, ipso Jure reddit eius peritum Nobilem.

Mr Elkin and Mr Lee, who are depraved as base tradesmen, it is well known that they have been both sheriffs of London and Mr Lee shortly to be mayor of that city. So that it cannot be denied, but unto men of that place of civil government such honor of Arms hath been always allowed in former ages.

It is certain likewise that Mr Thwaites was an alderman of London and had this coat without the flower de luce given to him by a herald that hath no such authority. Which if it had passed by his warrant without the authority of us Kings of Arms happily it had never been called in question, yet such are daily given and passed without our knowledge.

This Walter Cowley who as it cannot be denied to be
descended of that howse of Cowley in the countie of Staff.
vntruly called Ironmonger being vnwilling to preiudice
the heires of that howse, accepted the Moulletes to be added
vpon the bordure of his auncient coate of Armes by our
aduice and consent.

The late Erle of Essex, Erle Marshal of England
commaunded mee and Clarenciaulx, to giue these Armes
to Murgatord sometime secretary then Steward to the
most reuerent Lord the Archbishoppe of Canterbury
a Iustice of peace hauing other office of dignitie with these
expresse wordes: A Secretary to a councellor of Estate
doth serue the Estate & therefore qualified to beare Armes
And his Lordship wrotte also in that behalfe as Mr Temple
can testifie

Mr Whitmore a rich Marchant of London borne in
the countie of Salope where he possessed faire landes and
where in Chesheire that name and familie is farr dispersed
who all beare this coate of Armes aunciently. Wherevnto
for a more especiall difference at his funeralls being wor=
shipfully entrered at London was added the Cinquefold in
the canton with the badge or cognisance conuenient. Neither
doth trades derogate more form Gentrie more in
England then in Venice &c.

This coate is not the Lord Birmichams now of Ireland. ffor
that is partie per pale, indented. Argent and, Sables. The
parson to whome it was granted. and that vppon some
proofe by him produced, Is a doctor, in the ciuill Lawe
And they by Rescripts of Emperors are called Clarissima
dignitate constituti. And they hould for a principle. That
Meritum Scientiae Iuris Ciuilis, ipso Iure reddit eius peritum
Nobilem.

Elkin: Lee: [their two coats of arms in left margin]

Mr Elkin and Mr Lee who are depraued as base trades
men. It is well knowen that they haue bin both Sheriffes of London
and Mr Lee shortly to bee Maior of that Cittie. So that
it cannot be denied, but vnto men of that place of Ciuill
gouer[n]ment such honor of Armes hath bin allwayes allowed
in former ages.

It is certaine likewise, That Mr Thwaites was an Alder=
man of London and had this coate without the flower de
luce giuen to him by a Herauld that hath no such autho=
rite. Which if it had passed by his warrant without
the authorite of vs kinges of Armes happely it had
neuer bin called in question yet such are daily giuen
and passed without our knowledge./

[catchword] As for the other