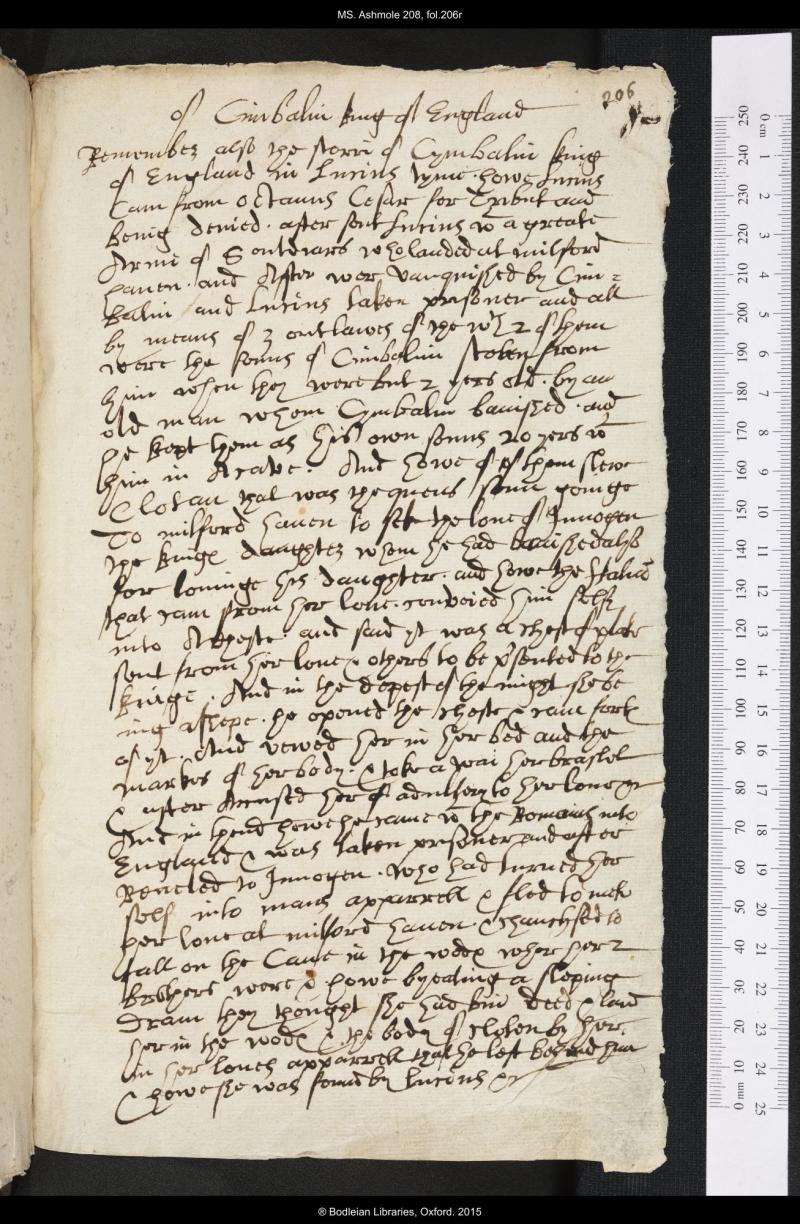 Of Cymbeline, King of England

Remember also the story of Cymbeline, king of England in Lucius's time: how Lucius came from Octavius Caesar for tribute and being denied, after sent Lucius with a great army of soldiers who landed at Milford Haven, and after were vanquished by Cymbeline, and Lucius taken prisoner, and all by means of 3 outlaws of the which 2 of them were the sons of Cymbeline stolen from him when they were but 2 years old by an old man whom Cymbeline banished, and he kept them as his own sons 20 years with him in a cave. And how of them slew Clotan that was the queen's son going to Milford Haven to seek the love of Innogen, the king's daughter, whom he had banished also for loving his daughter. And how the Italian, that came from her love, conveyed himself into a chest and said it was a chest of plate sent from her love and others to be presented to the king. And in the deepest of the night she being asleep, he opened the chest and came forth of it, and viewed her in her bed and the marks of her body and took away her bracelet, and after accused her of adultery to her love, etc.

And in the end how he came with the Romans into England and was taken prisoner and after revealed to Innogen, who had turned herself into man's apparel and fled to meet her love at Milford Haven and chanced to fall on the cave in the woods where her 2 brothers were, and how by eating a sleeping dram they thought she had been dead and laid her in the woods and the body of Cloten by her in her love's apparel that he left behind him and how she was found by Lucius, etc.

of Cimbalin king of England

Cam from octauus Cesar for Tribut and

being denied. after sent Lucius with a greate

Arme of Souldiars who landed at milford

balin/ and Lucius taken prisoner and all

by means of 3 outlawes of the which 2 of them

him when they were but 2 yers old. by an

old man whom Cymbalin banished. and

he kept them as his own sonns 20 yers with

him in A cave. And howe of of [sic] them slewe

To milford hauen to seke the loue of Innogen

the kinges daughter whom he had banished also

for louing his daughter. and howe the Italian

that cam from her loue. conveied him self

into A Cheste and said yt was a chest of plate

sent from her loue & others to be presented to the

Kinge. And in the depest of the night she be

ing aslepe. he opened the cheste & cam forth

of yt. And vewed her in her bed and the

markes of her body. & toke a wai her braslet

& after Accused her of adultery to her loue &c

And in thend howe he came with the Romaines into

England & was taken prisoner and after

Reveled to Innogen. who had turned her

self into mans apparrell & fled to mete

her loue at milford hauen & chanchsed to

fall on the Caue in the wodes wher her 2

brothers were & howe by eating a sleping

Dram they thought she had bin deed & laid

her in the wodes & the body of cloten by her.

& howe she was found by lucius &c.