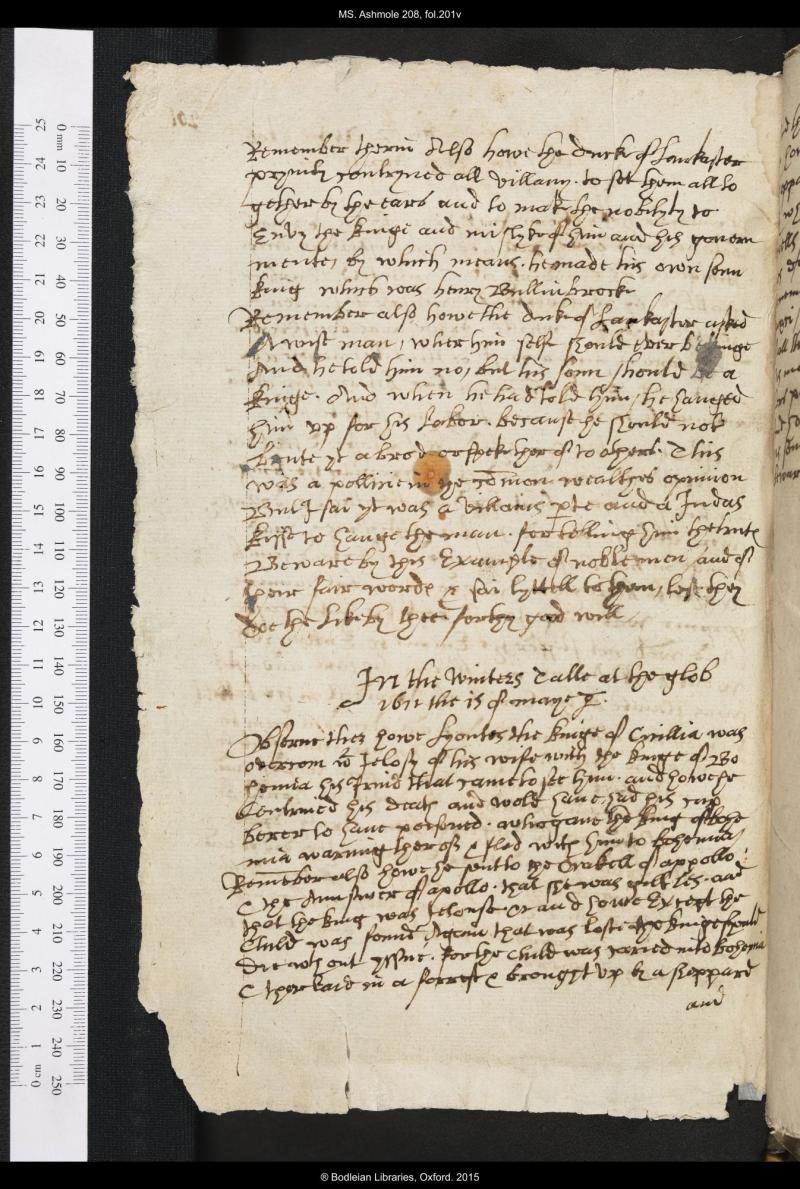 Remember therein also how the Duke of Lancaster privily contrived all villany, to set them all together by the ears and to make the nobility to envy the king and mislike of him and his governments by which means he made his own son king, which was Henry Bolingbroke.

Remember also how the Duke of Lancaster asked a wise man, whether himself should ever be king and he told him no, but his son should be a king. And when he had told him he hanged him up for his labor, because he should not brute it abroad or speak thereof to others. This was a policy in the commonwealth's opinion. But I say it was a villain's part and a Judas's kiss to hang the man for telling him the truth. Beware by this example of noble men and of their fair words and say little to them, lest they do the like by thee for thy good will.

In the Winter's Tale at the Globe

Observe there how Leontes the king of Sicilia was overcome with jealousy of his wife with the king of Bohemia, his friend that came to see him; and how he contrived his death and would have had his cupbearer to have poisoned, who gave the king of Bohemia warning thereof and fled with him to Bohemia.

Remember also how he sent to the Oracle of Apollo and the answer of Apollo, that she was guiltless and that the king was jealous, etc., and how except the child was found again that was lost, the king should die without issue. For the child was carried into Bohemia and there laid in a forest and brought up by a shepherd

gether by the ears and to make the nobilyty to

Envy the kinge and mislyke of him and his gouern

mentes by which means. he made his own sonn

king which was henry Bullinbrocke

A wise man, wher him self should ever be kinge

And he told him no, but his sonn should be a

kinge. And when he had told him he hanged

him vp for his labor. because he should not

brute yt a brod or speke ther of to others. This

was a pollicie in the common wealthes opinion

But I sai yt was a Villains parte and a Iudas

kisse to hange the man. for telling him the truth

Beware by this Example of noble men / and of

their fair wordes & sai lyttell to them, lest they

doe the like by thee for thy good will/

In the Winters Talle at the glob

overcom with Ielosy of his wife with the kinge of Bo

hemia his Frind that came to see him. and howe he

Contriued his death and wold haue had his cup

berer to haue poisoned. Who gaue the king of bohe

mia warning ther of & fled with him to bohemia/

Remember also howe he sent to the Orakell of appollo

that the king was Ielouse &c and howe Except the

Child was found Again that was loste the kinge should

die with out yssue. for the Child was caried into bohemia

& ther laid in a forrest & brought vp by a sheppard