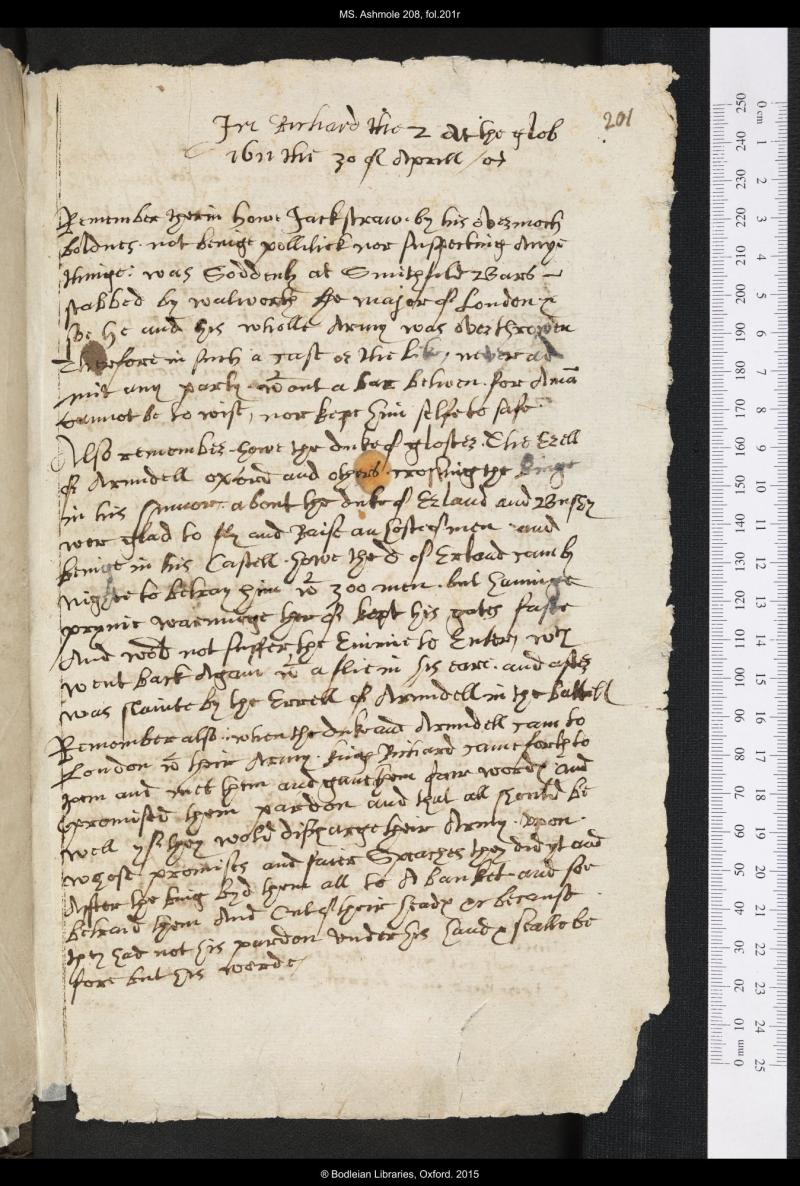 Remember therein how Jack Straw by his overmuch boldness, not being politic nor suspecting anything, was suddenly at Smithfield Bars stabbed by Walworth, the mayor of London, so he and his whole Army was overthrown. Therefore in such a case or the like, never admit any party without a bar between, for a man cannot be too wise, nor keep himself too safe.

Also remember how the Duke of Gloucester, the Earl of Arundel, Oxford, and others, crossing the king in his humor about the Duke of Erland and Bushy, were glad to fly and raise a host of men. And being in his castle, how the Duke of Erland came by night to betray him with 300 men, but having privy warning thereof, kept his gates fast and would not suffer the enemy to enter, which went back again with a fly in his ear, and after was slain by the Earl of Arundel in the battle.

Remember also: when the duke and Arundel came to London with their army, King Richard came forth to them and met them and gave them fair words. And promised them pardon and that all should be well if they would discharge their army. Upon whose promises and fair speeches they did it, and after the king bid them all to a banquet and so betrayed them and cut off their heads etc., because they had not his pardon under his hand and seal before, but his word.

In Richard the 2 At the glob

stabbed by Walworth the maior of London

soe he and his wholle Army was overthrowen

Therefore in such a case or the like, never ad

mit any party without a bar betwen for A man

Cannot be to wise, nor kepe him selfe to safe.

Also remember howe the duke of gloster. The Erell

of Arundell Oxford and others. crossing the kinge

in his humor. about the duke of Erland and Bushy

wer glad to fly and Raise an hoste of men. and

beinge in his Castell. howe the D of Erland cam by

nighte to betray him with 300 men. but hauinge

And wold not suffer, the Enimie to Enter, which

went back Again with a flie in his eare. and after

was slainte by the Errell of Arundell in the battell

Remember also: when the duke and Arundell cam to

London with their Army. kinge Richard came forth to

them and met them and gaue them fair wordes. And

promised them pardon and that all should be

whose promises and faier Speaches they did yt and

Affter the king byd them all to A banket and soe

betraid them And Cut of their heades &c because

they had not his pardon vnder his hand & sealle be

fore but his worde/