Thomas Whittington, a shepherd living in Shottery, made his will on March 25, 1601, signing by mark. He was buried on April 19, 1601 and his will was proved ten days later. It included a bequest to “the poore people of Stratford [of] xls [40 shillings] that is in the hand of Anne Shaxspere wyffe unto Mr Wyllyam Shaxspere and is due debt unto me being paid to mine executor by the said Willyam Shaxspere or his assigns according to the true meanying of this my will.” At the foot of his will are listed ten other debts owing to him, headed by four marks (£2 13s. 4d.) and 3s. 8d. due to him under the will of Joan Hathaway but not yet paid by her executors (and sons) John and William Hathaway. This is followed by a debt of £2 15s. 7d. owed by John and William Hathaway jointly and, further down, debts of 3s. 4d. and 4s. due from the two brothers respectively; in other words £5 19s. 11d. in additional debts owed by members of the Hathaway family.

Joan Hathaway was the widow of Richard Hathaway (Anne Shakespeare’s father) who under his will of 1581, had acknowledged that he owed Whittington, his shepherd, £3 6s. 8d. Joan’s unpaid bequest to Whittington may therefore represent the outstanding part of this debt. Be that as it may, the additional 40 shilling debt to Whittington, “in the hand of Anne Shaxspere,” mentioned in the body of the will, is perhaps also linked in some way to the Hathaway family’s wider indebtedness to him.

There is an important difference between Anne’s debt and the others. All the debts listed at the bottom of Whittington’s will, totaling £20 1s. 11d., including those owed by the Hathaway brothers, are also featured in the inventory of Whittington’s goods (made on April 21) where they were written off as “desparate” (Stratford-upon-Avon Inventories, i, pp. 186-7), the term used for debts that were not expected to be repaid. However, Whittington’s clear expectation that the bequest of 40 shillings to the poor, paid out of debt owed to him, would be honored indicates a firm belief that Anne, or William Shakespeare, would see that it was paid.

As a postscript to the list of debts at the bottom of his will, Whittington acknowledged that he owed the Hathaway brothers “for a quarter of an yeares bord.” At the time of his death he was clearly no longer their tenant, as he left 20 shillings to John Pace the elder of Shottery “wt whome I sojorne.” This suggests that perhaps Whittington had fallen out with the family with whom he had once lodged.

Whittington’s will, revealing close links between Shakespeare’s wife and the family of Richard Hathaway of Shottery, confirms her identification with Richard’s daughter “Agnes” mentioned in his will.

Other beneficiaries include “Thomas Hathway sonne to the late decessed Margret Hathway late of Old Stratford” who received 12 pence. The mother is presumably Margaret Hathaway, buried on September 7, 1600 who in turn may have been Margaret Smith who married Thomas Hathaway in October 1575. The couple’s son Thomas was born in September 1586. The family lived in Chapel Street but are not known to have been closely related to the Shottery Hathaways. Whittington’s godson, Thomas son of Edward Cotterell, baptized on January 7, 1598, also received 12 pence. 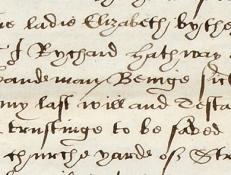