Shakespeare the Roisterer at the Tabard Inn

Home Exhibition 17th-century legacies
Some Notes for my Perambulations in and round the Citye of London
ca. 1633 -
1643
Contributed by
Centre for Research Collections, Edinburgh University Library 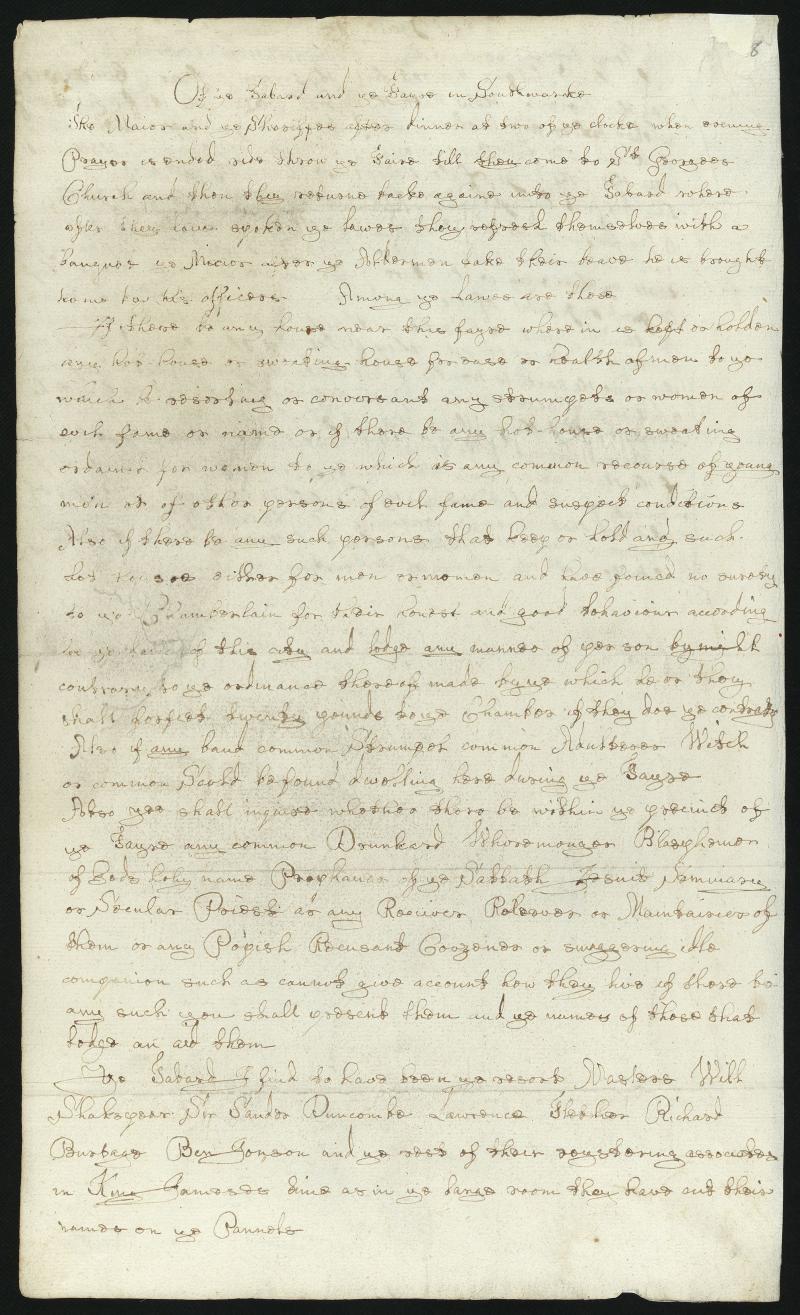 This document provides a unique record of Shakespeare, at the peak of his career, gathering with friends and colleagues at the Tabard Inn in Southwark, and all of them cutting their names into the paneling of one of the public rooms there. It lay unnoticed for decades in Edinburgh University Library until a reference to it was spotted in the summer of 2012 by Martha Carlin, Professor of History at the University of Wisconsin-Milwaukee (see below for her report of this discovery, published in 2014, from which some of the following information is drawn).

Fol. 8r, which contains the Shakespeare anecdote, is part of a collection of twenty-seven pages of antiquarian notes that focus principally on the London suburbs of Southwark, Bermondsey, and Hackney. These notes appear to be drawn in part from Anthony Munday's 1633 edition of John Stow's Survey of London, but they also contain much original material. Two pages (fols. 11r and 22r) refer to events that took place in 1641-3, while another (fol. 13r) is headed "November 1643." The entire set of notes probably dates from ca. 1633-43.

The anonymous antiquary -- a young, unmarried royalist -- who produced these notes described them (fol. 4r) as:

Some Notes for my Perambulation in and round
the Citye of London for six miles and
Remnants of divers worthie things and men.

It is intended by me only to notice those places and things that have been passed by or littled [sic] mentiond [sic] by those greate Antiquaries that have written of this noble Citye and the which places are fast ruining as this [sic] Tabard Inne and the many houses of Priesthood old Monuments Halls Palaces and Houses of its great Citizens and Lords and may be useful to searchers of Antiquitye in time to come.

He then turns to the subject of Southwark, and continues:

Here in Southwarke are many ancient places yet to be seen and fast falling in ruine and not noticed by others the Priory of St Mary Overye the Hall of the Bishopps of Winchester the old House of the Poet Gower the Inne of the Old Abbots of Battle and the Bridge and those Stews so long a source of profitt to the Maiers of London and Bishopps of Winchester the Bear Gardens and Playes and many are the greate that have had Houses here and the which I shall shew and mention in its place.

Shakespeare at the Tabard Inn

The unknown antiquary was clearly interested in the Tabard, a Southwark landmark. It lay on the east side of the high street (the modern Borough High Street), opposite the courthouse, and was celebrated as the inn where the pilgrims gather at the beginning of Geoffrey Chaucer's Canterbury Tales. On fol. 7r is a copy of John Stow's description of the Tabard, and of Stow's excerpt of lines from The Canterbury Tales concerning the inn (I: 19-29). To the material from Stow, the antiquary adds five additional lines from The Canterbury Tales (I: 30-34) and an extra observation about the inn:

the old Inne is of Timber nearly and very large and appeareth to me to have been but little changed as may be seen by the inside.

On fol. 8r the anonymous antiquary describes the annual visit of the mayor, sheriffs, and aldermen of London to the Tabard. They used the inn as their headquarters during their formal inspection of Southwark Fair, which was held each September in the high street:

Of the Tabard and the Fayre in Southwarke

The Maier and the Sheriffes after dinner at two of the clocke when evening Prayer is ended ride throw the Faire till they come to St Georgees [sic] Church and then they returne backe againe unto the Tabard where after they have spoken the lawes they refresh themselves with a banquet the Maior after the Aldermen take their leave he is brought home bye his officers.

Next follows a note on the "lawes" that mandated a search for all those who practiced illicit behavior within the precincts of the fair (including fornication, prostitution, witchcraft, scolding, Sabbath-breaking, Roman Catholicism, and public drunkenness), and also for those who gave them aid or lodging.

Fol. 8r then concludes with a report that Shakespeare and his "roystering associates" used to meet at the historic Tabard Inn, and left their graffiti on the panels of the "large room" there:

The Tabard I find to have been the resort Mastere Will Shakspear Sir Sander Duncombe Lawrence Fletcher Richard Burbage Ben Jonson and the rest of their roystering associates in King Jameses time as in the large room they have cut their names on the Pannels.

Shakespeare (1564-1616) and Burbage (1568-1619) had been associates since the 1580s, and members of the Lord Chamberlain's Men since the 1590s; Jonson (1572-1637) began to write for the company in 1598. The following year, the company transferred its productions from the dismantled Theater in Shoreditch to the new Globe on the Bankside in Southwark. In 1603 King James became the company's patron, and Lawrence Fletcher (d. 1608), an actor who had come to London in the king's entourage, became a member of the company, now called the King's Men.

Sir Sander (or Sanders) Duncombe seems unlikely to have been a fellow "roysterer" with Shakespeare and his companions. Knighted by King James in 1617, Duncombe obtained a monopoly in 1634 for the hiring-out of "covered chairs" (sedan chairs) in the capital. He also had a reputation as a healer: according to John Evelyn's Diary, when Evelyn's mother was dying in 1635, Duncombe attempted to save her life with "his celebrated and famous powder." In the early 1640s he was a Justice of the Peace for Middlesex. Presumably younger than Shakespeare, Burbage, Jonson, and Fletcher, and not otherwise recorded as their associate, Duncombe evidently visited the Tabard and carved his name among theirs, perhaps as an act of homage.

The most likely time for Shakespeare and his circle from the King's Men to have met at the Tabard was during the decade following the opening of the Globe in 1599. (In 1609 the new indoor theater at Blackfriars in the City became the preferred theater of the King's Men, although they continued to perform at the Globe.) Lawrence Fletcher's own graffiti could only have dated from this period, between his arrival in London in May 1603 and his death in September 1608. In the decade after 1609, Jonson became a member of a group of men, many of them lawyers and politicians, who met at the Mermaid Tavern in London, but Shakespeare was not a member of that group. To many scholars, this has cast doubt on the credibility of later accounts by Thomas Fuller and others of lively "wit-combats" and similar verbal competitions between Jonson and Shakespeare. Perhaps these exchanges did indeed take place -- at the Tabard Inn, in Southwark.

There were many drinking-houses in Southwark, and the Tabard was quite some distance from the Bankside theaters, and not on the most direct route between Bankside and London Bridge. So why did Shakespeare and his circle frequent the inn? Shakespeare clearly drew from Chaucer's work in A Midsummer Night's Dream (ca. 1595) and Troilus and Cressida (1602), and subsequently in The Two Noble Kinsmen (1613); perhaps he and his literary-minded friends chose the Tabard specifically for its association with Chaucer.

The manuscript and its (re-)discovery

The twenty-seven pages of notes (MS La. II 422/211) were acquired by the Scottish antiquary David Laing, LLD (1793-1878), who bequeathed his vast collection of manuscripts to the University of Edinburgh. This collection, which may number as many as one million pieces, remains uncatalogued, although a partial typescript index on slips has been published in photographic facsimile (Edinburgh University Library. Index to Manuscripts, 2 vols., Boston, Massachusetts: G. K. Hall, 1964). The slip for La. II 422/211, indexed under "LONDON. Antiquities," includes a note on the Shakespeare anecdote, perhaps by Dr. L. W. Sharp, the University Librarian (d. 1959). It was this reference that alerted Professor Carlin to the existence of this document.

To learn more about this document and its as-yet-unidentified author, see Martha Carlin's article "The Bard at the Tabard" in the Times Literary Supplement (September 24, 2014) and her podcast, "Shakespeare and the Tabard Inn" (Shakespeare Unlimited - Episode 28, July 15, 2015).

... The Tabard I find to have been the resort [of] Master Will Shakespear[e], Sir Sander Duncombe, Lawrence Fletcher, Richard Burbage, Ben Jonson, and the rest of their roistering associates in King James’s time, as in the large room they have cut their names on the panels.

Of ye Tabard and ye Fayre in Southwarke

The Maior and ye Sheriffes after dinner at two of ye clocke when evening
Prayer is ended ride throw ye Faire till they come to St Georgees
Church and then they returne backe againe vnto ye Tabard where
after they haue spoken ye Lawes they refresh themselves with a
banquet the Maior after ye Aldermen take their leave he is brought
home by his officers. Among ye Lawes are these
If there be any house near this fayre where in is kept or holden
any hot-house or sweating-house for ease or health of men to the
which be resorting or conversant any strumpets or women of
evil fame or name or if there be any hot-house or sweating
ordained for women to ye which is any common recourse of young
men or of other persons of evil fame and suspect conditions
Also if there be any such persons that keep or hold any such
hot-house either for men or women and have found no surety
To ye Chamberlain for their honest and good behaviour according
To ye lawes of this city and lodge any manner of person by night
contrary to ye ordinance thereof made by the which he or they
shall forfiet twenty pounds to ye Chamber if they do ye contrary
Also if any baud common Strumpet common Adulterer Witch
or common Scold be found dwelling here during ye Fayre
Also yee shall inquire whether there be within ye precinct of
ye Fayre any common Drunkard Whoremonger Blasphemer
of Gods holy name Prophaner of ye Sabbath, Jesuit, Seminary
or Secular Priest as any Receiver Releever or Maintainer of
them or any Popish Recusant Coozener or swaggering idle
companion such as cannot give account how they live if there be
any such you shall present them and ye names of those that
Lodge an[d] aid them
The Tabard I find to have been ye resort [of] Masters Will
Shakspear Sir Sander Duncombe Lawrence Fletcher Richard
Burbage Ben Jonson and ye rest of their roystering associates
in King Jameses time as in ye lange room they have and their
names on ye Pannels

Written by Martha Carlin. She will be publishing a fuller study of this manuscript, and can be contacted at carlin@uwm.edu.